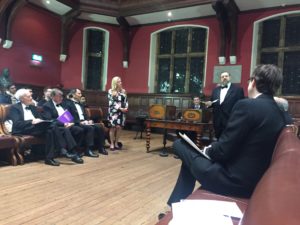 But there was no world leader or celebrity addressing humankind’s greatest dilemmas in a chamber that has hosted everyone from Albert Einstein to Madeleine Albright, Marine Le Pen and Steve Bannon.

Instead, at the dispatch box this week was a line-up of experts debating the finer points of corporate sustainability reporting.

A green paper of the same name, authored by Said Business School professors Richard Barker and Robert Eccles, was published ahead of the debate.

As Baker told RI, the aim of both the paper and the debate is to inform policy-making.

The Chair of the debate, Lady Lynn de Rothschild, joked: “This is a debate so important that [Parliament] had to cancel the Brexit vote last night.”

Great leaders have spoken here, she said, but now we are talking of the most powerful force in the world, capital markets, which cannot function without measurement.

Proposing the motion, Anne Simpson, CalPERS’ Director of Board Governance and Strategy, said:

“If we win this debate tonight and FASB and IASB decide to start doing their job, which is to set standards on all information that is relevant and useful to investors, there is a useful body of work there to get them started.”

Simpson was referring to the standards of the Sustainability Accounting Standards Board (SASB). It’s like “a starter pack”, she said, so that FASB and IASB don’t need to start from scratch.

Tom Quaadman, Executive Vice-President of the US Chamber Center for Capital Markets Competitiveness, argued that the best way forward is a “market-based approach”.

He added that Management Discussion and Analysis [MD&A, overseen by the SEC] is supposed to be “a very free flowing discussion where management express their opinions about the financials”. However, he said, concerns about class action suits often makes of MD&A just boilerplate disclosures.

Quaadman underlined that there are a number of stakeholders, other than investors, that should be taken into account when it comes to sustainability reporting: “Yet FASB and IASB only work within the strict construct of investment language.”

Quaadman suggested as a model to follow the ESG reporting template of the Edison Electric Institute, the US association representing investor-owned electric companies, which engages all stakeholders.

Simpson replied: “If it is voluntary reporting, you only have good news. The suggestion you are making that we [CalPERS], with 10,000 public and 80,000 private companies go to each one of them to get a little tailor-made disclosure is very inefficient and not trustworthy. This information is not audited; we can’t put confidence behind [it].”

Druckman said FASB and IASB are the right place to host sustainability reporting, given the urgency of the matter, on the back of the slow progress made on the Paris Rulebook at the COP24 in Katowice and the latest special report of the Intergovernmental Panel on Climate Change.“There is no alternative, they [FASB and IASB] have credibility and they have processes. And we need to act now”. Paraphrasing Victor Hugo, he said whether FASB and IASB want it or not, this is an idea whose time has come.

The next to present against the motion was Bob Herz, former FASB Chairman, one of the original IASB members, and currently a SASB Board Director.

“If it is voluntary reporting, you only have good news” — Anne Simpson

Herz gave two main reasons why FASB and IASB are not the right bodies to undertake this task. First, it is not covered by their mandates which are set by law and constitutional documents.

“Changing any of that takes a lot of time and it would be opposed by many people who just want them to stick to accounting standard-setting, which is very important.”

Herz maintained that the standards his opponents were demanding are already in place, referring to SASB standards:

“I agree on the urgency but a good set of standards, which have the same governance procedure and robust due process [as accounting standards], but specifically dedicated to this purpose, already exist. You should rally around those.”

Ian Mackintosh, a former IASB Vice-Chairman, now Chair of the Corporate Reporting Dialogue, was the third speaker in favour of the motion.

Mackintosh took issue first with the market-based approach argument. He said that it is working very slowly and in a very diverse, confused and not comparable way, with a lot of organisations providing input.

Regarding FASB and IASB’s structure, he argued that there is a precedent for their governing bodies, respectively the Financial Accounting Foundation (FAF) and the IFRS Foundation, extending their scope.

Next at the dispatch box was former SEC Chairman Harvey Pitt, who challenged his opponents on the definition of “what matters” and for trying to squeeze “blood out of turnip” by transmuting financial reporting into sustainability reporting.

He said: “We are told we should compel disclosure of what matters, and of course by that is meant what matters to Ms. Simpson. Now, I may agree with her but you may not. She knows what she wants to hear and other people know what they want to hear. And the question becomes ‘what are we talking about?’”

Pitt continued: “If we require, as a form of financial disclosure, sustainability information which nobody yet has defined here, all you will pay the cost of that requirement […]”

He added: “Financial materiality guides the disclosure of any information that relates to sustainability.”

Jonathan Bailey, Head of ESG Investing at Neuberger Berman, was the final speaker of the opposition team and he emphasised three points.

First, there is no need to have mandatory regulated disclosures of ESG data because “voluntary disclosure is growing at an extraordinary rate” thanks to the pressure of investors.

Second, organisations such as SASB, with staff who understand sustainability issues, are better placed than FASB or IASB whose leadership have clearly no interest in taking the task because “they have plenty of other things they are already dealing with”.

Third, there are unintended consequences associated with the “poorly designed regulatory intervention” advocated by his opponents, which would undermine the very progress made so far.

In that sense, Bailey argued that because the data is voluntary and not audited, it is protected from the lawyers and from class action suits.

“If you have to give detailed forward looking assumptions on every possible set of scenarios that you think could happen to your company, and then you have to through legal and compliance, I can guarantee that investors would not be getting that information,” Bailey said.

Sir Callum McCarthy, former Chairman of the Financial Services Authority (now the FCA) had the last word in favour of the motion.

“I’m absolutely concerned that if we were to adopt the view advanced by the opposition we would have an exacerbation of the present major problems in corporate reporting, namely, that we have an excess of data which gets in the way of real information.”

McCarthy offered as an example the voluminous reporting accounts of major banks at the time the financial crisis broke, ranging from 250 to 500 pages, which he described as “cornucopia of data that provided little information”.“One needs to integrate financial and non-financial reporting. It has been repeatedly suggested in some of the arguments that these are completely separated. This is nonsense, there is an important degree of overlap between them,” McCarthy said.

McCarthy also challenged the reported unwillingness of the accounting bodies. As a former trustee of the IFRS Foundation he said that IASB is well equipped to undertake the proposed task.

“They have done some of the most pressing financial reporting issues, such as leasing, insurance and financial instruments. They have the time and resources at the moment to devote to this. So the idea that they are not capable of doing it, irrespective of the view of the present chairman of the IASB, is a nonsense.”

RI coverage of FASB and IASB: