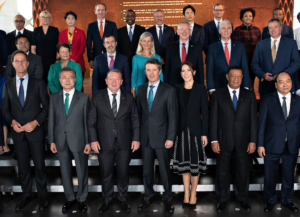 Concern that progress is lagging on achieving the UN Sustainable Development Goals was a key point made by the Crown Princess of Denmark last week at a high-level event hosted by the Danish government in Copenhagen.

The inaugural P4G (Partnering for Green Growth and the Global Goals 2030) Summit was convened by Danish Prime Minister Lars Løkke Rasmussen to accelerate positive action on tackling climate change and to speed up delivery of the UN Sustainable Development Goals. It focuses on public-private partnerships (PPPs) to achieve this.

But Rasmussen, who in 2015 co-chaired the UN Sustainable Development Summit where the SDGs were adopted, was keen to stress that the Summit and P4G should lead to concrete progress. “To quote Elvis. A little less conversation, a little more action,” he said.

Robert Orr, Special Advisor to the Secretary-General on Climate Change at the United Nations, said the P4G Summit would bring high-level conversations down to ground level.

And workshops brought together business and governments in honest conversations about how to forge positive PPPs. Some complained that regulators did not understand the world of finance sufficiently, and many stressed the need for de-risking tools, such as blended finance, to crowd in capital.

Though only one focus of the conference, many of the panels at the summit touched on finance and how it was still far removed from the investment needed to achieve the SDGs, especially in developing countries.

Philipp Hildebrand, the former Swiss central bank head who is Vice Chairman at BlackRock, said it was necessary to help investors in Africa, Latin America and Asia to tackle issues such as migration, but described it as the “hardest piece to crack”.

Hildebrand also spoke to the need for a universal language on what is sustainable. This was an oft-repeated concern, most prominently on a panel moderated by Prime Minister Rasmussen, including two young female social entrepreneurs, Ana Hajduka, founder and CEO of Africa GreenCo and Amy Jadesimi, CEO of Lagos Deep Offshore Logistics Base.Earlier, Rasmussen had spoken of the need for “business unusual” to tackle global challenges. But Hajduka said “business unusual” was risky and also needed “financial unusual” which was not in place yet.

“If we are serious that it is business unusual, finance unusual really needs to follow,” she said.

She continued: “The devil is in the detail. Regulators seem to agree on the agenda. But financial institutions are not there yet in analysing the credit risk of ‘business unusual’. The flexibility to analyse credit in a different manner won’t be there very soon.”

Jadesimi also said that a definition of sustainability everybody accepted was critically important and if achieved could be used as a measure of credit.

Cities were another focus at the event.

Kristian Jensen, Denmark’s finance minister, predicted that cities would take over from governments in tackling climate change. “They are closer to constituents and acting much faster. Cities will take up more space in the discussion.”

Mark Watts, executive director at C40, a coalition of cities focused on tackling climate change chaired by Michael Bloomberg, said it was working with P4G on partnerships such as initiatives to accelerate zero-emissions buses in cities and reducing buildings’ energy consumption.

Watts said Shenzhen in China has 100% electric buses, but outside China there were less than 1,000 electric buses worldwide. He said far too many mayors still got cheaper loan interest on diesel vehicles than electric ones but said parity would challenge this, as would political commitments for zero carbon cities.

And the issue of tax was highlighted by Japan, a signatory to the Copenhagen Commitment, with its minister of foreign affairs Tarõ Kono saying the overarching principle of the SDGs is “to leave no-one behind”.

He called for an international solidarity tax on activities that have benefited from globalisation where the proceeds would be given to international organisations helping refugees or those affected by natural disaster.

“A currency transaction tax, even with a low rate, could fill the funding gap,” he said.