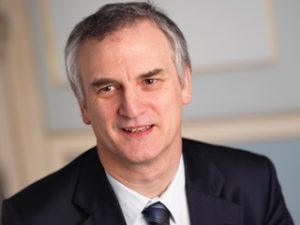 This article is one in a series of thought leadership pieces written for Responsible Investor by members of the European Commission’s High Level Expert Group on Sustainable Finance. To see other HLEG coverage, see here, or to comment, visit our discussion page.

When thinking of the financial system, many people focus on commercial banks. Banks – defined as deposit takers – are in fact just one of many different types of financial intermediary. They get special attention in part because they create deposits on their own balance sheets when they lend – thus they use leverage to create credit in a way that non-deposit institutions cannot. The business model of a bank makes it ideal for some types of finance and not others, and in this short article I give a personal perspective on what the role of banks might be in developing and supporting a more sustainable economy. This is a prime issue in the context of the work of the EU High-Level Expert Group (HLEG) on Sustainable Finance.
Banks are particularly good at assessing credit risk, especially for large numbers of smaller borrowers; the more homogenous the better. Banks dominate in providing retail mortgages and SME lending, even though there are many specialist non-banks operating in those sectors too. Non-banks typically compete by taking on niche credit risks (e.g. large mortgages or auto finance). Investment banks, or the related arms of deposit-taking banks, play a complementary role, especially in arranging very large corporate loans or helping borrowers to issue bonds or equities.
Given their advantages, banks play a key role in originating credit, including longer-term infrastructure lending. But their funding sources – deposits and relatively short-term debt – mean they are not ideal as holders to maturity of long-term assets. Having originated long-term loans, a bank would ideally securitise the better credits to be funded by marketable debt securities, or otherwise sell such loans on. Where such a process is possible, it can free up a bank’s balance sheet to create more credit.
Better holders of long-term assets are insurance companies, pension funds and other savings institutions. These typically want to hold bonds (of high credit quality) or equities rather than loans, so a process of securitisation of prime quality bank loans can successfully locate longer-term assets with those who need to hold them.
Banks originate credit on commercial terms where they think the risk justifies the returns, although not usually beyond a given risk tolerance. For higher risks, equity is often thought to be more appropriate than debt and banks do not typically take equity stakes and only hold traded equities only as part of other market activity (for market marking or to hedge equity derivatives for example).
A few banks are public utilities, but most are not and like most commercial firms, banks would not normally see it as being their role to choose credits based on political or social factors.So how can we influence them to make sure that finance is directed towards a sustainable economy and not just for short-term rewards which are not sustainable? Banks will react to a number of influences, including:

Customers and the demand for credit. If a sustainable asset requires financing, then someone has to be willing to borrow. We can’t expect banks to lend if there is no effective demand to borrow. A complaint by many investors is the current lack of green investment opportunities.

Investors and reputation. Where banks have been taking Environmental, Social and Governance (ESG) factors seriously, they have mostly done so for reputational reasons. Even with a purely commercial orientation, political and social pressure does have a reputational effect and this should not be under-estimated.

But a bank’s response to such pressure, however well intended, is not usually transformative unless it is owned and driven by the mainstream business units and that happens when the pressures become more directly commercial.

Risk and regulation. The risks from ESG factors, especially climate, have been under-rated until recently. In the past couple of years, regulators and others have started to point out the very real risks from stranded assets and other sources. The problem is that such risks are still seen by many as being long term, but they aren’t just long term: new technical developments are on the brink of potentially causing huge disruptions to sectors such as energy, transport, and construction. That could result in very significant risks crystallising within, say, the next three to five years. On top of that, governments and policymakers globally are due to start implementing the Paris Agreement, which could result in a lot of unanticipated new risks emerging.

Profit. Now we are talking! There will be ample opportunities to make – and lose – money through financing the transition to a more sustainable economy. The cost of new technologies such as solar cells, computer processing power, intelligent software and batteries continues to plummet and its efficiency to improve. Many other industries supply those directly affected, and hence will share in the risks and opportunities. Banks have financed major changes in economic structure for thousands of years. Individual firms will not necessarily be successful in anticipating the changes, but in the capitalist system those who – by luck or judgement – get it right can grow rapidly (think Microsoft, Apple, Google), and those who don’t will fail. The common extra challenge now for banks is that technology is supporting changes such as peer-to-peer lending which could disrupt the business model of banking itself.
So the policy priorities for re-orientating the banking industry should be:

Ensure the demand for credit is there to support sustainable infrastructure – energy, housing, manufacturing, commercial property. Where profitable, successful banks will supply the necessary loans without policy intervention. Use government guarantees sparingly, and only where necessary. Encourage innovation and competition in industry that will require new funding, don’t defend existing vested interests. And don’t rely solely on bank finance – promote equity or bond finance where that is more appropriate.

Encourage the reputational pressure from policiticians, shareholders and other investors. It’s a blunt tool but it plays a part in ensuring that all banks move in the same direction.

Emphasise the risks. The regulators are now on the case and we need firms’ own risk management processes to improve. Its early days for both, but the risks are becoming clearer all the time. We don’t need prudential regulation to go beyond the risks – which are much bigger and shorter-term than has been previously appreciated.The business opportunities are being spotted by some, but there is a long way to go. That includes the potential for re-tooling the banking function using new technology. And we are finding that some opportunities require collaborative working, especially where new industry standards/interconnectivity is an issue.

The financial system has a big role to play in delivering a more sustainable economy, and banks are a special part of that. We need to raise awareness of the risks and opportunities to encourage the banks to do what is their own best interests – and make sure that the opportunities in the real economy can be grasped.

Dr Paul Fisher is a Senior Associate at the University of Cambridge Institute for Sustainability Leadership. He spent 26 years at the Bank of England, and was Chair of the Board of Trustees at the London Institute of Banking and Finance. He is also Chair of the London Bullion Market Association and a non-executive director of the UK Debt Management Office.

To give feedback on the group’s interim report, published in July, see here.