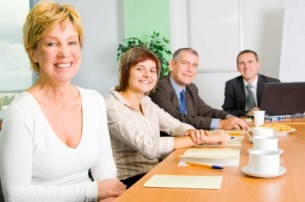 While the business case for gender diversity is well-established with a growing body of evidence linking greater board and managerial diversity with better company financial performance (1), the pace of progress on boards and in C-suites has been remarkably slow. In 2014, the percentage of women on boards globally stood at 12%. Within the S&P 500, women hold only 19% of board seats and 5% of CEO positions (2). Some estimates show that it will take decades for women to achieve equal representation in the boardroom, and over 80 years to achieve gender parity in the workforce (3). In spite of what seems to be a long list of discouraging statistics, there is reason for optimism that the tipping point for gender diversity in corporate leadership may not be as far away as we think.

Rate rise
Women are being appointed to boards at an increasing rate: In an environment where there is no real threat of quotas, the rate of female board appointments in the US is actually increasing. In the S&P 500, women accounted for 30% of new director appointments in 2014, up from 24% in 2013 and 17% in 2009 (4). This trend is not just limited to the large cap universe. Proxy advisory firm ISS notes that small cap companies are “nominating women to their boards at the fastest pace on record.” (5)

Board evaluation
Diverse boards are viewed as an important governance factor: Deloitte recently highlighted board diversity as a key governance issue for 2015 (6) while a survey by PricewaterhouseCoopers of investors representing over $11 trillion in assets under management (AUM) found that nine in 10 investors believe that boards should revisit their director diversity policies. Interestingly, few investors believe that the lack of diversity is the result of a lack of qualified candidates whereas “most investors instead place the blame at the board and/or leadership unwillingness.” (7) In a consultation during the drafting of its 2015 policy guidelines, Institutional Shareholder Services, Inc. (ISS) found that 60% of investors and 75% of issuers consider diversity in evaluating a board. (8)*Changing face of engagement*
Investors are asking for more diversity: Investors have long been engaging with companies on the issue of diversity, but the face of these engagements is changing. Whereas these engagements were once largely driven by socially responsible and sustainable investing firms and religious investors, the involvement of large city and state pension funds and state officials is rising. A series of board diversity campaigns coordinated by the Thirty Percent Coalition, for example, have brought together signatories representing over $3 trillion in AUM. (9) Since 2008, investors have filed over 100 board diversity shareholder proposals, and more than half of those were filed in 2013 and 2014. (10) Investors are expected to file over 20 board diversity resolutions in 2015. Board diversity is also one of the driving factors behind the New York City Pension Funds’ initiative on proxy access. That fund, representing $160 billion in AUM, (11) has filed so-called “proxy access” proposals at 75 companies based on various governance concerns; nearly a third of the proposals were filed at companies with “few or no women directors and little or no apparent racial or ethnic diversity.”

Critical mass
As greater numbers of companies add women on their boards, the scope of engagements is expanding with an increased emphasis being placed on diversity in executive management. Investors are also zeroing in on the idea of “critical mass,” the point at which the benefits associated with gender diversity begin to be most realized, and are asking companies for significantly more transparency on their efforts and plans to achieve greater diversity in corporate leadership.

Directed capital
Investors are directing capital towards companies with diverse leadership teams: Seeking to capture the financial benefits associated with diverse leadership and reflecting a growing demand in the marketplace (according to the Center for Talent Innovation, women control 39% of investable assets in the US, and 77% of women want to

Reputation risk
The national conversation about gender is accelerating: Corporate behavior that at one time would have hardly been considered newsworthy is now attracting attention. One only has to recall the backlash Facebook endured after completing its IPO with an all-male board, or the ongoing criticism directed at companies in Silicon Valley for their perceived inaction in creating inclusive workforces. This spotlight is spurring change; Facebook now has two women directors; other tech companies including Google, Apple, Twitter and Yahoo! releasedemployee demographic data after a longstanding reluctance to share such data publicly. Intel, a company that has long disclosed its demographic data, furthered its commitment to diversity in early 2014 with the announcement it would spend $300 million over five years to reach its hiring and retention goals within its workforce and expand the talent pipeline within the industry. Microsoft, after a remark by its CEO created controversy, has reportedly increased diversity training for employees with a particular focus on “unconscious bias” and monitoring systems for pay equity. (13)
Taken together, these are all indicators that gender diversity is fast becoming a mainstream issue, that companies are integrating diversity considerations into long-term strategic planning and that these trends will continue to be key drivers of meaningful progress.