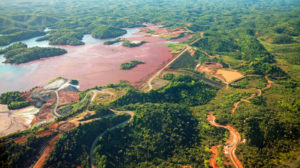 The Church of England Pensions Board, the Council on Ethics of the Swedish AP Funds, and the UN Environment Programme (UNEP) are working on an Independent International Tailings Institute to act as a home for the Global Tailings Standard, brought in after the 2019, Brumadinho mining disaster in Brazil.

After the collapse of the Brumadinho mining tailings lake, which killed more than 250 people, the Principles for Responsible Investment (PRI), United Nations Environment Programme (UNEP), and the International Council on Mining and Metals (ICMM), the  extractives industry trade body, collaborated on the Standard for the safe management of mining waste storage facilities around the world.

Adam Matthews, Chief Responsible Investment Officer at the Church of England Pensions Board, and John Howchin, Secretary General of the Swedish Council on Ethics, acted on behalf of investors in the negotiations to create the Standard. The pair also co-chair the Investor Mining & Tailings Safety Initiative, a related organisation set up after Brumadinho.

Although the specific objectives of the new independent Institute will be confirmed by an upcoming Advisory Board, Matthews told RI that the current thinking is that the Institute will update and evolve the Global Tailings Standard, verify its implementation, and serve as a resource of best practices where related corporate disclosure is publicly available.

Matthews told RI: “Ultimately this Institute, with independence at its heart, will be a key part of addressing the problem of tailings dams that are collapsing and driving change across the  mining sector. If we get this right, we think it potentially is a model for how you can shape other interventions within the mining sector.”

The Board of the Institute, which will be comprised of approximately 10 individuals from banking, insurance, industry, academica and other stakeholders, will work on defining the Institute’s remit and processes.

Matthews added that individuals have been approached to sit on the Board and an announcement will be made shortly. He said that the Church of England, the Council on Ethics, and UNEP would not sit on it, but said it was too soon to say what role the organisations would have at the Institute.

The trio are working on what the Institute’s governance structure will be; Matthews said he anticipates the involvement of stakeholders from the Board. They are also looking at what a sustainable funding model would look like. The plan is that by January 2022 – the third anniversary of the Brumadinho disaster – the details will be ironed out and the Institute launched.

Matthews said: “The timeline is ambitious, but it needs to be. This is a clear present risk and this institute is a key part of ensuring that it gets addressed.”

The announcement of the Institute comes as the Democratic Republic of Congo’s Environment Minister said earlier this week that the country would seek compensation from the owners of an Angolan diamond mine after a tailings dam leak polluted drinking water, causing 12 deaths and making thousands of people ill.