Helen Wildsmith has been awarded the 2020 Joan Bavaria Award for Building Sustainability into the Capital Markets by sustainability non-profit Ceres and Boston SRI manager Trillium Asset Management. Wildsmith, who is Stewardship Director at UK charity fund manager CCLA, was recognised for leading engagement efforts on climate change, including her role in the passing of climate resolutions at BP, Shell, Rio Tinto, Anglo American and Glencore. The late Joan Bavaria – founding Co-Chair of Ceres and Trillium founder – was a key figure in the growth of SRI in the US.

Siobhan Cleary has been tapped by sustainability reporting standards body the Global Reporting Initiative (GRI) to drive market adoption of its standards, becoming Director of Capital Markets Engagement. Cleary, who has previously worked at the Johannesburg Stock Exchange and Accenture, is completing an MSC in climate change at Kings College. The GRI has also named Thijs Reuten, formerly a senior advisor at the Netherlands Ministry of Foreign Affairs, as Head of Policy. 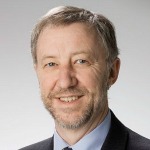 Graeme Russell is to step down immediately as CEO of A$5.5bn (€3bn) Australian arts industry retirement fund Media Super as he recuperates from illness. He will serve as a special advisor to the fund until July 1 before retiring. Prior to this role, Russell was inaugural CEO of First Super, one of Australia’s largest super funds. He will be replaced in the interim by Media Super COO, Tony Griffin.

Investment consultant Redington has hired Torsten Köpke as a Director in its Global Assets team, with a focus on expanding the firms work in Germany. Köpke has advised and worked with companies including Aon Hewitt, Willis Towers Watson and FERI. He was most recently Managing Director at US private equity house Silverfern.

S&P Global Ratings has appointed climate specialist Paul Munday to its Sustainable Finance team as Associate Director, Climate Adaptation & Resilience Specialist. He previously led the Climate Resilience team at WSP UK, and will continue to focus on climate resilience and adaptation in his new role.