Helena Viñes Fiestas is leaving BNP Paribas Asset Management after a decade to join the board of the Spanish securities market regulator, the Comisión Nacional del Mercado de Valores. Most recently BNP’s Global Head of Stewardship, Viñes Fiestas will retain her position on the European Commission’s advisory group on sustainable finance, where she specialises in implementing the EU’s green taxonomy. Michael Herskovich will replace her at BNP Paribas, having been Global Head of Corporate Governance at the firm since 2009. He holds board and committee roles at the International Corporate Governance Network, the French Association of Asset Managers and the Council of Institutional Investors.

Herman Bril, the outgoing CIO of the UN Joint Staff Pension Fund has been appointed as CEO of Arabesque Asset Management. Ulrika Hasselgren, former Global Head of Sustainability and Impact Investment at Danske Bank, has been named the firm’s Head of Nordics, as well as Head of Europe for Corporates and Sovereigns. Hasselgren joins immediately, while Bril will take up his new position in July. The hires come just weeks after Arabesque announced it had poached HSBC’s Global Head of Sustainable Finance, Daniel Klier, to become CEO of its ESG data arm S-Ray. It has also named Matthias Hübner, a former Partner at consultancy firm Oliver Wyman, as its Head of Germany and Financial Services Advisory.

Steffen Hoerter has left Allianz Global Investors to become Head of ESG at Munich Re. During his time as Global Head of ESG Integrations and Solutions at Allianz, Hoerter helped develop the EU’s new rules for low-carbon benchmarks as a member of the European Commission’s Technical Expert Group on Sustainable Finance. He is a member of the SASB Investment Advisory Group.

Moody’s has moved Rahul Ghosh over to lead outreach and research for its new ESG Solutions Group. Ghosh headed up ESG for Moody’s Investor Services until the end of 2019, after which point he took a role running emerging markets research for the firm. He will now return to ESG as a Managing Director at the new unit, which was launched last year. 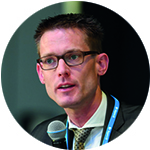 Shareholder advisor firm Squarewell has created a dedicated ESG team, hiring Anna Hirai from Vigeo Eiris, where she was an ESG Research Analyst, and Heloise Courault from ISS, where she was a Senior Associate in Corporate Governance Research, as Co-Heads of ESG Research.

Andy Moniz has joined Acadian Asset Management as its Director of Responsible Investing. Moniz leaves Putnam Investments, where he was Director of Applied Data Science Investments. He has also held data and research roles at Deutsche Bank.

Julia Haake has been promoted to Global Head of Stewardship & Engagement at ISS ESG. Haake, who held the role of Head of Client Success and ESG Strategy before her promotion, joined ISS when it acquired sustainability-ratings house Oekom in 2018.

Sally Sudworth has joined consultancy Mott MacDonald as its Global Head of Sustainability and Climate Change. She leaves the UK Environment Agency, where she oversaw its net zero carbon strategy for infrastructure, as well as being its sustainability lead for flooding.

Dedicated sustainability house Ambienta has hired William Kitchin, who left his role as Director of Marketing at Titan Capital Management in November, as its Head of Business Development for public markets. It has also hired Fidelity’s former Head of Institutional Sales for Italy, Michele Romualdi, as its Head of Sales for Italy.

Tauni Lanier, a non-executive Director at think tank Carbon Tracker, has been promoted to Chief Sustainability Officer at sustainability fintech World Wide Generation. Lanier, who is also on the advisory board of the International Sustainable Finance Centre, joined the fintech as Sustainability Director in 2018.

Global Canopy is hiring a Sustainable Finance Metrics Lead to work on its Aligned Accountability project. Candidates should have experience within a financial institution, ESG service provider, consultancy or NGO, said the think-tank. Applications close on the 15th of March.

Diamond Walton has joined the Tipping Point Fund on Impact Investing as Programme Associate. Walton, who has 10 years of experience in grantmaking for a number of nonprofits, was most recently a Programme Manager at the Charlottesville Area Community Foundation.