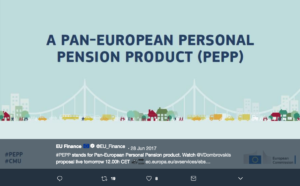 There’s been a call for providers of the European Union’s proposed pan-European personal pension product (PEPP) to be prevented from engaging in “aggressive tax avoidance”.

It’s part of a range of sustainable investment features including exclusions that are being called for by the European Parliament’s Employment and Social Affairs Committee (EMPL).

The PEPP is an ambitious plan to create a pan-European ‘third-pillar’ complementary pension product in the face of low savings rates, demographic change and a fragmented market.

It was proposed by the European Commission, the EU’s executive arm, last year and is now going through parliamentary scrutiny.

As part of the process, the EMPL committee has just issued its opinion on the PEPP proposal, shepherded through by centre-right Austrian MEP Heinz Becker as ‘rapporteur’. The opinion will now feed into the work of the Committee on Economic and Monetary Affairs (ECON), which is the lead committee for the proposal.

The EMPL text states, in an amendment to the original draft text: “In ensuring compliance with their obligation to develop an investment policy in accordance with the prudent person rule, PEPP providers should be prevented from engaging in aggressive tax avoidance strategies and investing in high-risk and non-cooperative jurisdictions.”

The text, which was approved by vote at a committee meeting in Brussels at the end of last month, goes on to say that PEPP providers “should adopt an investment exclusion policy in order to ensure that savings are not invested in highly controversial and harmful products such as coal-based energy, nuclear weapons, cluster munitions, the production of tobacco or used to support harmful conducts such as serious human rights and labour rights violations, severe environmental, climate damage, corruption and tax avoidance”.

Another amendment in the text that the committee approved is that PEPP providers “should engage regularly with their clients to ensure their concerns and preferences, including regarding ESG factors, are properly integrated into the investment decisions” – interesting in the light of the resistance to incorporate similar provisions into the MiFID directive as part of the EU’s Action Plan on Sustainable Finance.

There’s also a call for the Commission to set up a panel to monitor the development and implementation of the PEPP, which will include the European Insurance and Occupational Pensions Authority (EIOPA), national supervisors and “at least one ESG expert”.

The original Commission draft proposal back in June 2017 merely stated that PEPP providers “should be encouraged to consider such factors in investment decisions and to take into account how they form part of their risk management system”.

And the new committee opinion goes much further on sustainable finance than a draft report on the PEPP plans issued by the ECON in February and an opinion from the Committee on the Internal Market and Consumer Protection (IMCO) last month.

The PEPP idea grew out of a 2012 European Commission white paper on pensions and also fits in with its Capital Markets Union plans. It’s envisaged that insurers, pension funds, investment firms, banks and asset managers will be able to design PEPPs. An impact assessment estimated the proposal could grow the EU personal pension market to €2.1trn by 2030.