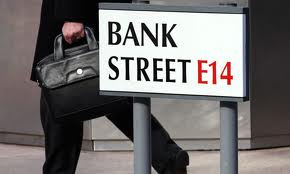 As on Wall St, banks everywhere appear to court scandal. And in what looks to be a repeat performance of a shareholder spring, only with a different cast, some of them are attracting attention again for the 2014 round of annual general meetings (AGMs).
Barclays
If Barclays’ AGM experience proves to be a template for what other companies in the UK and Europe are going to have to go through we look to be in for a pretty stormy shareholder spring.
The board endured a full two hours of baiting on bonuses from shareholders, with protests outside reminding those of us with long memories of the Cedric Brown British Gas ‘Snouts in the Trough’ campaign. Not only did CEO Anthony Jenkins face criticism from individual shareholders, in an extraordinary move, Alison Kennedy, governance and stewardship director at Standard Life, stood up to announce that it was voting against the remuneration report because: “We are unconvinced that the amount of the 2013 bonus pool was in the best interests of shareholders.”
She added that Standard Life would support the forward looking remuneration policy and the increased cap on bonuses. Barclays, like many other banks, is asking shareholders to approve bonuses of up to two times salary. Last year the EU capped bank bonuses at one times salary without shareholder approval. But at Barclays, PIRC indicated that it would vote against this. Part of PIRC’s dissatisfaction is likely to be because, like other banks again, the bank has said it will be introducing those infamous ‘allowances’.

Allowances in ‘bankspeak’ means fixed cash or equity payments that increase the level of fixed pay for directors and employees so the bonus 2X multiple is a multiple of something much larger than a simple base salary and therefore worth that much more. To many this would seem like cheating, to everyone it is undermining the spirit and the letter of the cap’s intentions. At Barclays, the allowances are called, cleverly, “role-based pay” and are paid out in shares with restrictions lifting over five years. There’s probably a whole study to be done investigating what the various banks have decided to call their allowances.Shareholder objections were not helped by headlines screaming “Bonuses Up, Profits Down,” reflecting a 10 per cent rise in the group bonus pool to £2.4 billion, despite posting a 32 per cent fall in pre-tax profits.
Barclays knew it was in trouble, of course, even before the AGM, and to try and mitigate this it announced the appointment of Crawford Gillies to its board on 1 May this year. Gillies holds directorships at Standard Life (yes, that Standard Life), Scottish Enterprise and the Mitie Group, and will take over chairmanship of the remuneration committee. But, in fact, despite the addition of £950,000 worth of role-based pay in addition to his £1.1 million salary, Barclays CEO Antony Jenkins’ pay opportunity was reduced 16 per cent due to a lowering of short and long-term bonus opportunity. The same effect can be seen on other executive directors’ remuneration levels. In addition, Jenkins declined any 2013 annual bonus he might have earned citing the rights issue, restructuring costs and costs associated with legacy issues as his reasons. After the AGM, he might add a few more reasons to that list.
These actions should have gone a long way to fending off an outright shareholder revolt, but the momentum had started, and banks are the new privatised utilities.

The UK’s banks are not the only ones courting protests. Again, as on Wall St, where pay has been creeping up to pre-financial crisis levels, pay for European banks has begun to climb, despite their involvement in interest rate manipulation legacy issues.
At UBS, CEO Sergio Ermotti’s pay increased by about a fifth last year to CHF10.73 million. Furthermore, under the company’s tortuous and various share plans, he saw 66 per cent more shares vest in 2013 than in 2012, with a value of approximately CHF1.2 million. More than 11 per cent of shares voted against the bank’s bonus plan at the latest AGM in early May, while nearly 86 per cent backed it. Swiss shareholder groups Actares, Ethos and ZCapital all advised a vote against pay at both UBS and Credit Suisse. This resulted in 16.6 per cent of shareholders voting against pay at Credit Suisse, nearly two thirds more than opposed the same measure last year.

CEO Brady Dougan received a substantial increase in 2013, but still, 81.3 per cent of shares voted to support the plan.
The attention paid to executive pay in Switzerland, where voters last year forced public companies to give shareholders a binding vote on compensation, is particularly intense, though at present votes are non-binding, this may change next year for many firms.
Deutsche Bank co-CEOs Anshuman Jain and Juergen Fitschen also saw their total compensation increase, but this was largely due to 2013 being their first full year in the post. Each were paid €2.3 million in salary last year, with total remuneration granted between €8 and €9 million respectively. While their granted remuneration moved in lockstep – apart from higher fringe benefits for Jain – their vested pay differed markedly, with Jain earning €10 million and Fitschen only €7.2 million. In Deutsche Bank’s case, however, there is unlikely to be a great deal of shareholder unrest surrounding these payments as they are a direct result of a remuneration policy approved by shareholders at the 2013 annual general meeting.
Man Group
CEO of investment firm Man Group, Emmanuel Roman, saw his pay more than triple last year to $3.4 million after the company’s performance recovered and bonuses paid albeit at well below maximum levels. Roman received a salary of $1 million and short and long-term bonus payments valued at $2.3 million. The contrast between earnings at a UK-based investment firm and a US-based one could not be more stark. For example, according to a recent survey by USA Today, Apollo Global’s CEO Leon Black received $546 million, Stephen Schwarzman, CEO of Blackstone Group, received more than $465 million and KKR co-CEOs Henry Kravis and cousin George Roberts received more than $160 million each.

Daimler/BMW
The general economic recovery in the car market is not limited to the US, which has consequently seen increases in CEO pay. CEOs of Daimler and BMW both experienced small increases in remuneration. Daimler increased CEO Dieter Zetsche’s pay 1.2 per cent. Zetsche’s remuneration for 2013 rose to €8.25 million from €8.15 million a year earlier. Remuneration for Zetsche included a base salary that was unchanged at €2.01 million. His short and medium term bonuses both increased (although the medium term bonus remains at risk, based on the company’s share price against an automotive index). The grant date value of his long-term equity incentive, on the other hand, fell, to €2.8 million. In contrast, each element of the remuneration for Norbert Reithofer, CEO of BMW, increased, leading to a rise of just over 6 per cent, from €6.6 million to just over €7 million. Like Deutsche Bank, however, these German companies do not seem to be the target of any kind of unrest about executive pay.Porsche, which saw major protests about CEO pay levels in 2007, has not issued an annual report yet this year.

G4S
While Germany, thus far, is avoiding concerted shareholder action, the same cannot be said of at least some of the British firms that have already been at the receiving end of pay protests in prior years. In a series of articles for Responsible Investor, I have been tracking those companies that have either lost a shareholder vote on pay, or received a significant minority vote. Last year, G4S saw more than 20 per cent of its shareholders vote against its pay package. Like many other companies, its response was to hire a new CEO. Not only that, the chair of the remuneration committee – Lord Condon – retired, and was replaced by Mark Elliott. Unlike some others, however, the new CEO received a salary increase, a bonus and two conditional stock awards amid shareholder claims that this represents pay for failure for a company that is now paying fines for overcharging the UK government for tagging prisoners. New CEO Ashley Almanza was appointed at a salary of £890,000, compared to former CEO Nick Buckles’ £830,000. In addition, Almanza received a maximum annual cash bonus payout. We will see what the shareholders think of these actions at the AGM.
WPP
Advertising group WPP appears to have adopted a new policy on pay disclosure: if you leak it out in bits, maybe no one will notice. News of Sir Martin Sorrell’s LEAP [Leadership Equity Acquisition Plan] was released a month earlier than the annual report came out. Unfortunately, this being WPP, the “no one will notice” plan is not working. Although the company has terminated LEAP – a move which I still do not think was right as it was one of the best designed equity plans I’ve ever seen – it is a five-year plan and it is still paying out. Thus Sorrell received 1.78 million shares worth £22.7 million earlier this year. The LEAP payout reflected his performance between 2009 and 2013. During that period WPP shareholders saw total returns of about 230 per cent. Expect Barclays type protests at the AGM, nevertheless.
Aviva
Insurer Aviva also lost a CEO as a result of a pay revolt. With stretch performance achievements, new CEO Mark Wilson’s pay could have been £5.7 million. In actuality, for 2013, his pay comprised a base salary of £980,000 plus a bonus of £1.1 million pounds, one third of which will be paid in cash with the rest paid in shares deferred for three years, and a target long-term share award of £2.9 million.