Responsible Investor
Home Hot Topics “Premised on an assumption – unsupported by any cited facts – that...
Return to search
Institutions 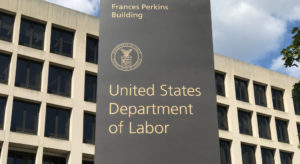 The proposed rules by the US Department of Labor (DOL) on how fiduciaries of employee pension plans should treat ESG factors seem unpalatable for almost all the investment firms that responded to the public consultation.

Analysis by a group of investors has found that 95% of all respondents, not just those categorised as professional investors, oppose the controversial changes to the private pensions covered by the Employee Retirement Income Security Act of 1974 (ERISA).

The analysis was undertaken by the US Sustainable Investment Forum, Ceres, Intentional Endowments Network, the AFL-CIO, the Interfaith Center on Corporate Responsibility, Impax Asset Management and Morningstar.

The group said that opposition among asset managers is nearly unanimous, with just one of 86 comments in favour. “Opposing comments came not only from asset managers focused on ESG investing, but from many large conventional asset managers, including BlackRock, Fidelity, State Street Global Advisors, T. Rowe Price, and Vanguard,” they said.

The DOL proposed rule goes by the name of Financial Factors in Selecting Plan Investments and seek to assist fiduciaries “in navigating these ESG investment trends” and in distinguishing “legitimate use of risk-return factors from inappropriate investments that sacrifice returns and promote non-pecuniary objectives”.

While the plans will not prohibit considering ESG factors in situations of “all things equal”, it requires a new level of paperwork to document the choice, and declares ESG not suitable as a qualified default investment.

The group of investors that analysed the responses to the consultation said opposition was driven by a number of factors.

First, investors complained that there is no evidence that a problem actually exists. For example, T. Rowe Price responded that “the proposal is premised on an assumption – unsupported by any cited facts – that ERISA fiduciaries are currently misusing ESG.”

Second, it dismisses significant research about the financial materiality and relevance of incorporating ESG factors into investment decisions.

Third, the proposed rule is based on a flawed assumption that ESG funds sacrifice financial returns in favour of “non-pecuniary” rewards.

In that respect, BlackRock wrote: “Enhanced data and insights make it possible to create sustainable portfolios without compromising financial goals. Our research, which relies on back-tested data, shows how ESG-focused indexes have matched or exceeded returns of their standard counterparts, with comparable volatility.”

Other investors, like Legal & General Investment Management went further, saying: “It is our strong view that the EBSA [Employee Benefits Security Administration] should make ESG considerations a bedrock of fiduciary duty rather than discourage the practice.”

Going ahead with the reform, the investor coalition said, amounts “to substitute the judgment of government bureaucrats for the wisdom of financial markets.”

The scope of fiduciary duties under ERISA plans has been periodically debated under successive administrations. Under President Clinton’s Secretary of Labour, Robert Reich, an interpretative bulletin was issued with a more flexible view that allowed Economically Targeted Investments to be considered.

Successive interpretations were issued in 2008, 2016 and additional guidance in 2018.

The latest move comes from President Trump’s Secretary of Labour Eugene Scalia appointed in 2019, who said: “Private employer-sponsored retirement plans are not vehicles for furthering social goals or policy objectives that are not in the financial interest of the plan, rather providing for the retirement security of American workers.”