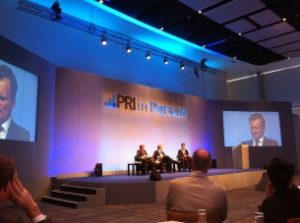 The Principles for Responsible Investment (PRI) has named Chris Fowle of the CDP as its new Head of Americas and Matt McAdam as its first full time Head of Australia.

The PRI has also named new heads for Canada, France and the Nordics.

Fowle joins the PRI in October and will replace Maria Lettini, who left the initiative earlier this year for a role with Jeremy Coller’s Farm Animal Investment Risk and Return (FAIRR) Initiative.

Fowle’s most recent role was head of investor initiatives at the CDP, the environmental data body formerly known as the Carbon Disclosure Project.

Before that, he worked for Terra Global Capital and the Rainforest Alliance. He spent nine years as vice-president of structured finance at JP Morgan and has also been a director at Lehman Brothers and Deutsche Bank and JP Morgan.

Fowle is not the first ex-CDP executive to join the PRI in the Americas. Sonal Mahida, a former vice president with the CDP and ex-corporate governance analyst at TIAA–CREF, had a stint as US Network Manager. She’s now Director with the Intentional Endowments Network.

Before that, Diane Bratcher, the ex-Director of the Mayor’s Pension Unit in the New York City Department of Finance, headed up a push into the US from 2012 – 2013.

McAdam, who joined the PRI in 2012 as its communications head, takes up his role from January 2017.He was formerly Associate Director of Communications at Standard & Poor’s in London, having been a journalist at the Australian Financial Review.

A spokesperson said McAdam would not be directly replaced, rather a Chief Operating Officer would be appointed to oversee events, communications, fund-raising and finance. A job ad for this post is available here.

Amongst other moves at the PRI, Nalini Feuilloley has joined as Head of Canada, based in Toronto and Yulia Sofronova, former Canada & Nordics Network Manager, will now be Head of the Nordic Region, CEE and CIS. Marie Luchet is joining as Head of France and Southern Europe, Global Networks & Outreach (a new role).

Feuilloley spent four years at BlackRock in Toronto in client relations; before that, she spent a year working in business development at Nouriel Roubini’s Roubini Global Economics in London.

“The PRI has a rapidly growing global signatory base, who have told us that they need strong teams in place who understand their local ESG issues and challenges,” said Lorenzo Saa, the PRI’s director of global networks and outreach.

“To ensure that the PRI can help signatories keep moving responsible investment forward in their markets, we have strengthened our global network through key hires in the US, Australia, France/southern Europe, and Canada, as well as a new focus on the CEE and CIS.”