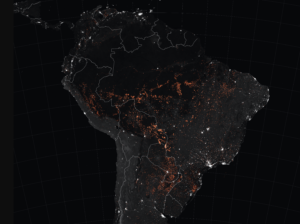 The Principles for Responsible Investment (PRI), the signatory body whose membership now includes the central banks of Hong Kong and the Netherlands, is co-ordinating an investor statement on the deforestation and fires in the Amazon.

Investors are being invited to sign the statement by September 13 ahead of a public launch on the 16th.

The statement will call on companies to disclose and implement a commodity-specific no deforestation policy with quantifiable, time-bound commitments covering the entire supply chain and sourcing geographies.

They should also assess their operations and supply chains for deforestation risk and reduce this to “the lowest possible level”.

The investors also call for the setting up of a “transparent monitoring and verification system” to ensure suppliers comply with companies’ no deforestation policy.

The draft letter says: “Increasing deforestation and fires in the Amazon are an environmental catastrophe with an immense impact on society, biodiversity, water and the climate.

“The Amazon, as the world’s largest rainforest, is a global repository of biological diversity, and provides invaluable ecosystem services which underpin economic activities across the globe.”

“Deforestation and its associated impacts could pose systemic risks to investors’ portfolios.”

It notes that while several hundred companies have committed to end commodity-driven deforestation by 2020, evidence of progress against commitments has been “limited”.

Institutional investors are already engaging with companies via the Investor Initiative for Sustainable Forests (IISF), a joint initiative of the PRI and US advocacy group Ceres.

It’s an issue that has seen Nordea’s asset management arm suspend buying Brazilian government bonds and comes as Greenpeace has received 139,656 signatories for a campaign to get fast food companies to stop sourcing from the Amazon region amid a global outcry.Meanwhile, the PRI has also today released its climate snapshot, an analysis of how its signatories are reporting based on the TCFD (Task Force on Climate-related Financial Disclosures) recommendations – which become mandatory for signatories from next year.

It found that 449 investors are undertaking scenario analysis, or “more than double the number of investor signatories reporting and describing their work on scenarios in 2018 and represents 27% of the 1,707 signatories who were eligible to report or 75% of signatories who opted to report against the PRI climate indicators in 2019”.

But the PRI said that the “majority of signatories remain at the start of their journey on TCFD”.

The PRI is also working on a project called the Inevitable Policy Response (IPR) that is designed to be a “central business planning case” for investors, corporates and regulators.

The aim is for it to replace the International Energy Agency’s New Policies Scenario (NPS), the usual base-case climate scenario referenced by investors.

The PRI argues the NPS is too conservative as it just reflects countries’ policy commitments under the Paris accord, known as nationally determined contributions (NDCs) and not potential future policy action.

Rather the IPR will provide a “realistic” outline of the coming policy response, and quantify the financial risks that it presents – over a timeframe that is relevant to investors.

It is a collaboration between the PRI, consulting firm Vivid Economics and Energy Transition Advisors, the group founded by Mark Fulton, the ex-Head of Research at DB Climate Change Advisors where Julian Poulter, the founder of the Asset Owners Disclosure Project, is a Partner.