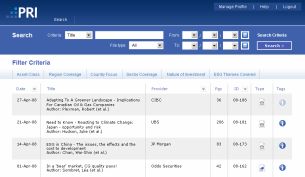 The number of asset owners (pension funds/insurers) making responsible investment criteria part of their hiring contracts for fund managers jumped by 25% in the last year, according to the 2009 United Nations-backed Principles for Responsible Investments’ (PRI) annual assessment of its signatories. The PRI said it had surveyed almost 300 global pension funds (asset owners) and fund manager signatories, and that 63% of the asset owners – which include some of the world’s biggest retirement plans – now made RI elements a part of manager hire stipulations, up from 38% in 2008. It said the assessment also revealed that both asset owner and manager signatories of the PRI were increasingly becoming ‘active owners’ with 95% saying they had been involved in a total of 12,000 shareholder engagements with companies on issues such as the environment (67.8%), corporate governance (68.5%) and labour rights (57.8%). Approximately 85% of the PRI investors said they had collaborated with other investors on shareholding voting or engagement campaigns. Over 50% of PRI asset owners and 68% of investment managers said they now had a documented shareholder engagement approach. In addition, 64% of the total surveyed signatories said they were now voting on all shareholder resolutions in domestic markets and 47% in foreign markets. The PRI said the responses showed that a significant number of mainstream investors had ‘turneda corner’ on putting responsible investment into practice. In particular, the report said 90% of the total PRI investors were now demanding that listed companies in developed markets produce standardized ESG reporting, notably on carbon emissions. Simultaneously, the PRI has also published a guide for the unlisted private equity sector, titled: “Responsible Investment in Private Equity: A Guide for Limited Partners”. It provides detailed suggestions for how limited partner (LP) investors can work with their General Partners (GPs) to ensure that ESG issues are considered during fundraising, investment, due diligence and ownership. The guide includes nine case studies from LPs and GPs, Abraaj Capital, Actis, Blue Wolf Capital Management, Doughty Hanson, the New Zealand Superannuation Fund, KKR, Permira and Robeco, which it says demonstrate how improved management of ESG issues can help deliver superior investment returns. Else Bos, CEO Investments at Dutch pension fund giant PGGM and a PRI Board member, said: “The ownership model of Private Equity gives investors the ability to have a direct influence on the companies they own. By working together to integrate ESG into the investment and ownership processes, LPs and GPs can help ensure that ESG issues are identified and addressed, leading to more sustainable and profitable companies.” There are currently over 560 PRI signatories representing assets of $18 trillion.
Link to UNPRI private equity stream