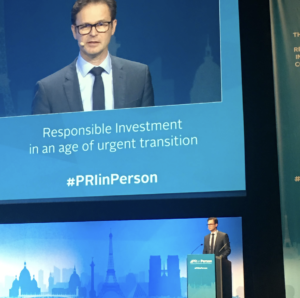 Experts have released a set of global climate policy predictions for coming decades, in an attempt to offer investors and companies a more realistic alternative to the current International Energy Agency (IEA) scenarios.
The Inevitable Policy Response (IPR) initiative by the Principles for Responsible Investment (PRI), Energy Transition Advisors, Vivid Economics, Carbon Tracker, the 2 Degrees Investing Initiative and the Grantham Research Institute published five reports today, including “a comprehensive forecast of policy intervention in the 2020s” that will underpin some ground-breaking work on how investment portfolios could be impacted.
The document identifies eight ‘policy levers’ – carbon pricing, bans on coal and combustion engines, energy efficiency measures, improvements in agriculture, emissions removal through forestry and land use, renewables, carbon capture & storage and industrial decarbonisation – that it thinks will be pulled by governments between 2023 and 2050.
The result is a starker forecast than that of the IEA, whose New Policy Scenario – a key pillar of many climate scenario models currently being developed in the market – works on a business-as-usual basis, incorporating confirmed future policy changes, but nothing speculative.
This has caused some to accuse it of not offering a realistic picture of how governments will need to tighten rules to meet their climate targets.
At a session at PRI in Person in Paris today, audience members were polled on their expectations on the transition and more than half said they anticipated “a delayed, forceful and disruptive policy response”, rather than a smooth transition or no transition at all.The IPR’s forecast doesn’t work towards a 2-degree compliant policy landscape – it doesn’t use a carbon or temperature constraint – but estimates how governments will realistically respond to climate change, predicting that the 2023 global climate ‘stocktake’ required under the Paris Agreement and a third iteration of the Nationally Determined Contributions in 2025 will contribute to a ramping up of policy over the next decade.
The forecast follows four “golden rules”, according to IPR: 1. Genuine evidence of institutional and political readiness. 2. Technological viability. 3. Behavioural and societal momentum, and 4. Alignment with a Just Transition (avoiding policies that trigger leaps in food prices, for example).
At Climate Week later this month, the IPR will release more details on the model, looking at the implications of its predictions for the macro-economy, as well as energy and land use systems. In November, it will follow up with analysis for asset classes and investment portfolios. 2 Degrees Investing Initiative and Carbon Tracker will run the predictions through their own models as part of the initiative.
The other four reports launched by IPR today include one dedicated to the Just Transition, one on the economics of renewable energy and one on global corporate support for the transition.

Meanwhile the event saw the announcement of the PRI Leaders’ Group of 47 asset owners hailed for their work in “selecting, appointing and monitoring” investment managers in listed and private equity. The winners of the PRI Awards were also announced.