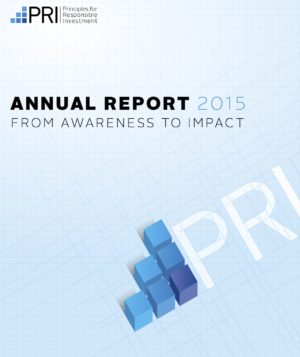 The Principles for Responsible Investment (PRI) says it will consult on ways to improve signatories’ accountability to the initiative, which could include new levels of membership to reflect signatories’ levels of commitment to responsible investment – with Chair Martin Skancke saying a revision of its six Principles themselves may be warranted.

The PRI, whose signatory base has grown to $59trn, will also look at new criteria for delisting signatories, says Skancke. He adds that the PRI – which celebrates its 10-year anniversary in 2016 – must also look at how its Reporting Framework can support increased accountability.

“Targeting ever-greater mainstream incorporation of the concepts that we’ve spent the last decade formalising must be a key goal of the next 10 years,” Skancke says in the PRI’s new Annual Report, subtitled ‘From Awareness to Impact’.

The anniversary, he says, is a chance to look forward and ask what should responsible investment look like in another 10 years and what role should the PRI play?

Skancke speaks about strengthening, and if necessary redefining what being a PRI signatory means. A natural starting point for this, he reckons, is the six Principles. Skancke notes that the Principles were drafted before the global financial crisis and primarily address the relationship between investors and the companies they invest in.But the PRI’s current work (e.g. fiduciary duty, long-term mandates etc.) has focused on systemic issues and principal-agent problems. On top of this, the PRI’s mission statement, drawn up after the crisis, addresses the obstacles to a sustainable financial system. “Should this ethos now be incorporated into the Principles themselves?” Skancke asks.

The PRI’s online engagement platform, the Clearinghouse, had 127 asset owners active during the year to the end of June this year. That’s up from 96 in the same period the year before.

The PRI signed up 220 signatories in the July 2014- June 2015 period, including names like Eaton Vance Management, Coller Capital and the Public Sector Pension Investment Board. But it also has delisted 100 signatories. Link to PRI Annual Report.