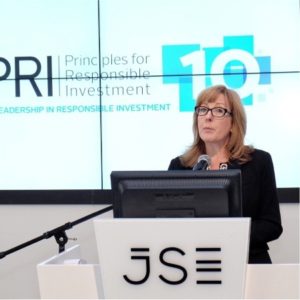 The Principles for Responsible Investment has said that investors will continue engaging with ExxonMobil for another four years – despite a resolution on climate change targeted at the oil giant co-ordinated by the Climate Action 100+ initiative being rejected by the Securities and Exchange Commission.

It has emerged that the SEC has agreed that Exxon can omit the resolution co-filed under the initiative (which the PRI helps to coordinate) by the UK’s Church Commissioners and New York State Comptroller Thomas DiNapoli.
The SEC agreed with Exxon’s argument that the proposal seeks to “micromanage” the company.

But CA100+ is a five-year project and Fiona Reynolds, the CEO of the PRI, said, “we aren’t going anywhere anytime soon”.

She wrote on LinkedIn: “It’s very disappointing that the SEC in the United States has supported Exxon against shareholders who want action on #climate change stating that it is micro management by shareholders. Investors are trying to be engaged stewards and responsible owners. Principle 2 of @pri is active ownership.

“Climate Action 100+ investors will continue to engage with the largest emitters in the world to ensure action aligned with the Paris agreement. This might be a setback but this engagement has 4 more years to run so we aren’t going anywhere anytime soon.”

The Exxon setback contrasts with the traction CA100+ investors are getting with Shell, which has made a series of positive commitments and even a joint statement with investors.

The Church Commissioners released a statement saying it was reviewing its options after the SEC ruling.

It said: “This is a disappointing and puzzling decision that enables Exxon to close down interaction with its shareholders on climate-related strategy. Exxon is continuing to misjudge the mood of investors on climate risk and the fact remains that at present the company is providing no assurance that it has a strategy consistent with the goals of the Paris Agreement. We are reviewing our options.”While the CA100+ resolution won’t go to the vote at the Exxon AGM next month, investors will still be able to vote on a climate resolution filed by advocacy group As You Sow, which is calling for a report from Exxon “assessing the public health risks of expanding petrochemical operations and investments in areas increasingly prone to climate change-induced storms, flooding and sea level rise”. The SEC said it “transcends ordinary business matters”.

Alternatively, campaign group ShareAction has argued that investors should vote against the re-election of Exxon’s CEO and Chair, Darren Woods. Woods, who took over from Rex Tillerson at the helm of the world’s largest listed oil company in 2017, last year wrote to President Donald Trump, urging him to keep the US a party to the Paris climate agreement.

CA100+ was officially launched at the PRI in Person event in Berlin in 2017 but has its origins in CalPERS targeting ‘Systemically Important Carbon Emitters’ (SICEs – though that term has since been dropped) in 2016.

Elsewhere, the PRI has commented on the Senate Banking Committee hearing on ESG investing and proxy voting that is currently taking place in the US.

Will Martindale, Director of Policy & Research said: “Investors and asset owners worldwide are increasingly demanding that asset managers integrate material ESG factors into investment decisions. US policy should support this evolution by ensuring investors’ ability to raise critical ESG issues with companies through the shareholder proposal and proxy voting processes. To meet market demands for more sustainable investment products, PRI calls for policymakers to require that companies disclose uniform, comparable ESG data that can be integrated into investment processes.”