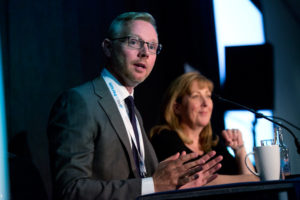 The UN-supported Principles for Responsible Investment (PRI) says it will start to de-list signatories that don’t show demonstrable progress in implementing its six principles.

The 1,500-signatory body will create a watchlist of signatories that aren’t making progress, PRI Managing Director Fiona Reynolds said at the organisation’s annual Signatory General Meeting in Singapore today. “You can’t just sit there,” she told the audience, adding that those on watch will have two years to make improvements.

The moves are the result of a wide-ranging consultation undertaken by the body, whose signatories account for some $60trn.

Unexpectedly, Reynolds announced that there would be “random audits” of signatories’ responses under its Reporting & Assessment (R&A) system. Signatories would also be de-listed for incurring fines or other regulatory sanctions that aren’t in the spirit of the PRI.

There would be no ‘seventh principle’ covering the sustainability of the overall financial system, as had been mooted, she revealed – as this was felt to be unworkable. The idea of ‘gold’, ‘silver’ and ‘bronze’ standards was also dismissed, as “signatories didn’t want that”, according to Reynolds. She floated the idea of annual awards for signatories – and the possibility of independent assurance for R&A reports.Another new feature would be a provisional membership option, for those at the early stages of responsible investment.

More broadly, the PRI will collect data about what signatories are doing in terms of promoting a sustainable financial system. It would also look to integrate the UN’s Sustainable Development Goals (SDGs) into its work, creating an advisory committee and building the investment case for the SDGs. She added: “We will do a lot of collaboration with our UN partners, the UN Environment Programme and the Global Compact”.

Going forward, the reporting framework would focus more on “outcomes and impacts”, not just investment processes, Reynolds told delegates at the imposing Marina Bay Sands resort. There would also be “closer partnerships” with other reporting frameworks.

Another innovation would be that service providers would have to report to the PRI, with a pilot starting next year before becoming compulsory in 2018.

Although the PRI is targeting growth in assets owners, Reynolds stressed that “with de-listing, we’re quite happy to go backwards”.