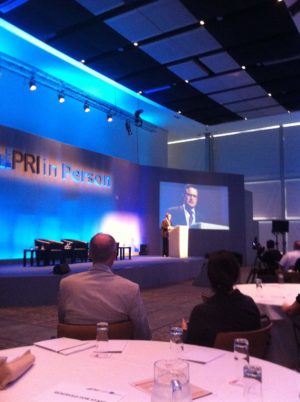 James Gifford, Executive Director of the United Nations-supported Principles for Responsible Investment (PRI), has outlined what he believes are the major challenges for the PRI over the next decade as he prepares to step down from the organisation later this month after 10 years at the helm.
In a passionate final address to the PRI in Person conference in Cape Town, South Africa on October 3, Gifford recounted the start-up phase of the PRI and heralded its success in gathering signatories involved in the oversight of $32trn in assets.
He said the next 10 years though is all about ‘impact’: “We have to be able to demonstrate the benefits of responsible investment for risk mitigation, alpha generation, shareholder engagement and aligning investment with the sustainability goals of society.”
But Gifford also told conference delegates to remind themselves that they were part of a “movement for change”, which he said was not something people in the investment world always wanted to think about.
“We have to remember that we are trying to make the world a better place with more sustainable returns for beneficiaries. We need to say this is an investment in the future.”
To this end, Gifford said he believed there were three change themes where it would be key for investors, particularly asset owners, to be active and supportive.First, he said, investors needed to be involved “in the thousands of peer-to-peer conversations” that were necessary to convince people of the validity of responsible investment.
Second, he predicted a “wave of austerity” that could seriously affect the revenues of the fund management buy-side. He said the role of asset owners would be crucial in standing firm on responsible investment when resources might be challenged.

PRI signatories are “on the right side of history”

Third, he said there needed to be a “much better focus” on what responsible investment means for the end savers and pension beneficiaries: “This is not necessarily PRI’s job, but we need to be part of it,” he said.
Finally, he said that the PRI had to match the accountability and transparency that it expects from its signatories, notably in the new reporting and assessment framework: “You can expect a lot from us on this,” he said.
Closing the speech, Gifford said that PRI signatories were “on the right side of history”
He added: “That might sound a bit presumptuous, but if it’s possible, why wouldn’t you want to try to find a way to get good returns with better environmental and social outcomes?”