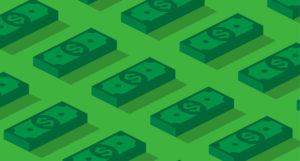 Investment portfolios are crammed full of exposure to the banking industry. Nearly 15 percent of constituents in the MSCI ACWI are “financials” and nearly half of the biggest US corporate bond issuers at the end of 2021 were banks. This means that none of the 300-plus institutional investors that have promised to reach net zero by 2050 can credibly meet their objectives without banks getting there first.

And the exposure isn’t just direct. Universal owners – those big and diversified enough to hold a cross section of the entire economy – also need banks to support decarbonisation to avoid wholesale economic collapse.

“Fixed income is the lifeblood of the global economy,” says Ulf Erlandsson, founder of climate think-tank the Anthropocene Fixed Income Institute. “It literally defines the cost of capital for all economic activities. And banks are right at the centre of that. Their relationships with high-emitting sectors can help keep that cost of capital low, acting as a sort of unofficial subsidy for unsustainable business models.”

The banking industry is working on ways to quantify its impact on climate, but even once these frameworks have been agreed and adopted it will take years before they can be populated with accurate, granular data.

In the meantime, shareholders are trying to accelerate action by ramping up their stewardship efforts at banks, with a number of resolutions heading to vote this AGM season.

Credit Suisse is being hit with Switzerland’s first climate resolution as Amundi and a raft of pension funds in the country team up with campaign group ShareAction to demand that climate disclosure and strategy are added to the bank’s articles of association. It’s a move Barclays and HSBC have already made, and one that ShareAction claims would “give new directors and sustainability staff a mandate to act boldly on climate, which shareholders believe would have a positive impact on the bank’s reputation, share price and profitability”.

Credit Suisse has countered the proposal by offering investors an advisory vote on its climate plan next year instead – an arguably underwhelming gesture, given that large companies in Switzerland will be required to disclose their climate plans and performance from 2024 anyway, under new laws.

Barclays, NatWest, Standard Chartered and UBS are among those already offering shareholders a ‘Say on Climate’ vote.

In North America, investor members of the Interfaith Center on Corporate Responsibility are submitting nine climate resolutions at banks including Morgan Stanley, JPMorgan, Citigroup, Wells Fargo, Goldman Sachs and Bank of America. Most ask the institutions to demonstrate how their business models are compatible with the International Energy Agency’s net-zero scenario.

“Banks play a critical role in the economy, and subsequently a critical role in the climate transition – it really does matter who’s on their client list and who isn’t,” says Erik Granström, a responsible investment specialist at Swedish insurance giant Folksam, which co-filed at HSBC in January, asking it to reduce its exposure to fossil fuels. That proposal was withdrawn after the bank tabled its own resolution which, if approved by 75 percent of shareholders, would require it to end coal-fired power and thermal coal mining financing by 2040.

“Banks could take a leading role in the climate transition by adjusting their policies and business practices in line with the Paris agreement,” says Granström. “That’s the reason we’re spending a little more time and resources on our engagement activities with them.”

He notes that, although there is a lot of work still to be done on transitioning the industry, progress over recent years has been good and banks have “been accommodating and open to discuss these issues with us”.

Other investors have their eye on a bigger prize at upcoming annual meetings. Billionaire hedge fund manager Chris Hohn urged investors last month to vote against the boards of banks “who are hiding their exposure to climate risk” by lobbying to stop stricter climate disclosure rules.

Hohn made the comments in response to claims by NGO Influence Map that the climate commitments of many of the world’s biggest banks are out of sync with their financing and lobbying activities. Analysis of 30 financial institutions concluded that, despite having green pledges, many are still members of industry associations involved in watering down sustainable finance policy and most continue to finance the fossil fuel industry.

Granström says that Hohn’s suggestion to vote against the boards of banks over climate progress is “always an option” but adds that “it really depends on the specific situation”.

Other methods of ramping up pressure on banks remain largely uncharted – especially those that sit outside the equities and stewardship teams.

Anthropocene Fixed Income Institute ranks the world’s biggest banks based on how much revenue they generate from syndicating bonds for the fossil fuel industry.

“You can look at divesting from the banks based on that list,” says Erlandsson, who used to run the bond desk at Swedish pension fund AP4. “But it would be more effective in the short term to just stop trading with them.”

While divesting from all banks that lend to new fossil fuels would require a mass exodus from the sector, hurting portfolio returns, Erlandsson says investors could overhaul their counterparty relationships – through which they agree to buy bonds and shares from certain banks – without much disruption.

“They could cut trading ties with a few of the worst performing banks without it having any significant economic effect and, unlike divestment, it would directly impact revenues for the banks,” he says. “The actual amount might be small, but it would serve as a powerful statement to the entire industry that these fossil fuel transactions create an immediate financial and reputational risk to other parts of the bank.”

Folksam has focused primarily on its role as a shareholder, but Granström says the SKr556 billion ($58.8 billion; €53.9 billion) asset owner has also been having conversations about sustainability and climate with its counterparties.

“The nice thing about leveraging those counterparty relationships is that it would really upset people in the green capital markets and sales teams of the worst-performing banks,” Erlandsson suggests. “And they will fight your fight for you, internally.”

One such person – a senior ESG bond manager at a leading bank, who asked not to be identified – tells RI there is currently no external pressure on his department.

“We don’t get any pushback at all from buyers, let alone anyone refusing to participate in a [green] deal” because of the bank’s broader climate performance, he says.

“In fact, I’m yet to speak to a single asset manager that’s doing anything differently on the transaction side, they are all just focusing on engagement. You’d think that all the assets they’d committed to net zero would impact their behaviour, but it’s still just a stewardship issue. Access to capital is exactly the same as it always has been.”

The most effective way to prompt change at banks, he continues, is to raise concerns about their performance “at the moment it really matters – when we’re out in the market looking for capital and trying to tighten pricing as much as possible”.

Investors also need to kick the tyres on the big numbers being bandied around in reports like Banking on Climate Chaos last week, which accused global banks of financing $742 billion of fossil fuels last year. “Not all fossil fuel financing is bad, so what matters here is the details,” says the banker. “When banks respond to those figures by saying they are retaining clients in order to help them transition, it amazes me that the next question from investors isn’t, ‘Can you show me how that’s reflected in your activities?’”

The source says investors should ask for granular data on how much financing to the fossil fuel industry has been packaged into transition instruments with decarbonisation conditions attached and how many clients have been assessed to ensure they are capable of making a low-carbon transition.

“Those questions – from clients involved in transactions, not just from shareholders – would really help move things in the right direction. And if we received questions like that on the DCM side, they’d be escalated up the chain, because this is such a sensitive issue. But we hear nothing,” he says.

Erlandsson echoes the need for investors to make a fuss at banks that have incompatible approaches to green and grey financing.

“Green bankers are often desperate for this external pressure because it gives them leverage at higher levels,” he says. “They might argue [to colleagues] that you can’t do a deal for the world’s biggest oil producer at the same time as positioning yourself as a leader on climate finance [referring to a series of Saudi Aramco deals managed by banks committed to net zero including BNP Paribas, Citigroup, HSBC, JPMorgan and Standard Chartered].

“But the reality is that, as it stands, you absolutely can. And you can make money from all of it. There is no downside. So investors should think about creating some.”