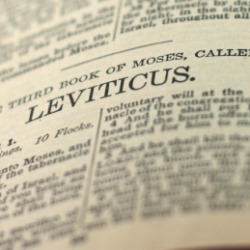 More than 400 Jewish rabbis in the US have followed other faith groups in calling for radical action against human-induced climate change, including demanding that fracking and tar sand projects be halted, subsidies to the oil industry ended and links to banks financing fossil fuels severed.

In a letter to America’s Jewish community, the rabbis say they accept the science behind climate change and urge that action be taken to save the planet. Citing passages from the Torah, they write: “Leviticus 26 warns us that if we refuse to let the Earth rest (for at least a year), it will rest anyway – through drought, famine and exile that turn an entire people into refugees.”

“Already we see floods, droughts, ice-melts, heat waves, typhoons, sea-level rises and the expansion of disease-bearing insects from tropical zones into the temperate zones Leviticus 26 embodied,” the rabbis write, adding: “Scientific projections make clear that worse will happen if we continue with carbon-burning as usual.”

The rabbis say several things should be done now to prevent further destruction of the earth and its people. These include stopping hydraulic fracturing (fracking) as it pollutes regional water supplies; ending tar sands extraction in Canada as it threatens Native American communities; as well as halting deep-sea drilling, for it has killed workers and sea life.As evidence of the latter, the rabbis pointed to the devastating oil accidents involving ExxonMobil (Prince William Sound) and BP (Gulf of Mexico).

The rabbis also call on their community to “move our money from spending that helps these modern pharaohs burn our planet to spending that helps heal it.” Among the measures urged are: shifting to renewable energy from fossil fuels; severing links with banks that finance “deadly carbon-burning”; stopping taxpayer subsidies to oil; and finally, lobbying policymakers to “institute a system of carbon fees to move beyond the carbon economy.”

The seven rabbis who authored the letter represent leading Jewish institutions, including the American Jewish University, the Shalom Center, the Central Conference of American Rabbis and the Reconstructionist Rabbinical College.

Their call for action echoes those made recently by other religious leaders. In his Encyclical letter from last June, Pope Francis urged that a price on carbon be established. At a conference earlier this month, Muslim leaders said a successor agreement to the Kyoto Protocol curtailing carbon emissions was overdue. Link