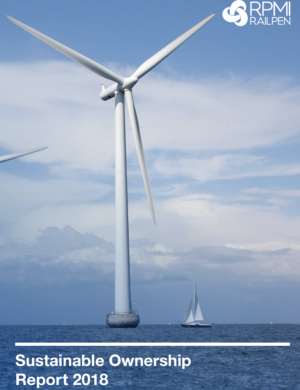 Railpen says it will vote against company chairs where it thinks they aren’t doing enough to respond to climate risk.

Railpen is the investment manager for the UK’s railways industry pension schemes, overseeing around £28bn (€32.7bn) in assets for 350,000 members.

Now, in a new report, it says it will resist corporates who don’t show they are responding to climate risk.

“Where there is insufficient evidence of a credible response to climate risk, leading to concerns regarding the quality of oversight, Railpen will vote against the re-election of the Chair of the Board, and/or the Chair of any appropriate committees,” it says in its new Sustainable Ownership report for 2018.

As it says in the report: “We have undertaken research and analysis to assess climate change risk within our portfolios. As a result, we concluded that climate change poses a complex and material financial risk to long-term investment returns and should be managed.”

It says it wrote to over 200 of its most significant holdings in January 2018 urging them to support the TCFD framework, and to another 100 companies in September 2018 when it published its 2018-19 voting policy.It also votes against companies who do not respond to the CDP’s climate change and water disclosure requests.

Railpen added that it has divested from companies which derive more than 30% of their revenues from the thermal coal and tar sands sectors as a “first step” to managing climate risk. It used data from a third-party provider and wrote to the companies to verify the analysis.

The report also features Railpen’s first disclosure against the TCFD, and it says it modelled its listed equities portfolio using the PACTA scenario analysis tool from the 2 Degrees Investing Initiative (2dii) and the Principles for Responsible Investment.

It said its equity portfolio has a weighted average carbon intensity of 366.1 tCO2e/GBPm [tonnes of CO2 equivalent per revenue] as at the end of November last year – against a figure of 338.8 tCO2e/GBPm
for the MSCI All Country World Index (ACWI) at the same date.

The investor’s Head of Real Assets has set a target of a 20% emissions reduction over the next 10 years from a 2017 baseline and other targets for asset classes will be set in the future.