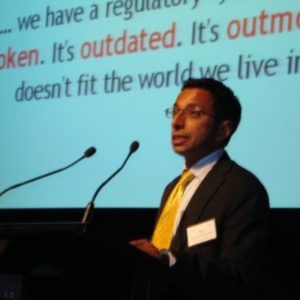 “But you are so different…. no one would take the career risks you have!”

This is a refrain I hear quite often when I invite ESG professionals to consider how they could be a bigger part of the solution.
Their logic is clear. We all know deep down that the ESG world has institutionalised a safe form of incrementalism. So anything which could be called “radical” inevitably means career risk.
That’s wrong!
This is contrarian career advice, so let me tell you what it’s based on. I’ve been fortunate to have two of the best jobs in the ESG sector – as head of RI at a large UK pension fund (USS) and then being headhunted to the same role at a very large global fund manager (AXA IM). I would not have got either post had it NOT been for my out of the box thinking. As someone who isn’t “into” quant analysis or box ticking activity, and with little knowledge of the investment industry when I entered it, my managers made non obvious appointment choices and weren’t disappointed.
As counterintuitive as it may seem, this “deviant” behaviour has been essential both for career success but also for impact and this was true for my 12 year period inside the investment system. And today there is much more space for people who say it like it is and not just on the far right. Think Jesse Klaver (Green party, Netherlands), Emannuel Macron, Angela Merkel, Bernie Saunders, Paul Polman, Elizabeth Warren, Sally Yates…even Lloyd Bankfein has joined Twitter and his first tweet was a criticism of the US pullout from the COP21 Paris agreement.Before I share the “secret sauce” for successful positive maverick behaviour, which is based on what I and other Preventable Surprisers have learnt, let’s just think about one example of a positive maverick. Bill Baue was a successful ESG journalist but then side stepped to become the co-founder of Convetit and Reporting 3.0. How does he see the trade off? His answer is clear: “The benefits far outweigh any costs.” He explains: “I am not a positive maverick because this is a personal bias or predilection. It is a fairly sober-eyed view of the imperatives of our situation. My positive maverick actions are context-driven, specific to the situation demanding action.” What does this mean in practice? Baue says: “My actions push for what the best science or ethical analysis suggests is needed. It’s then just a question of weighing the strategies that cascade from this against the imperatives.” How does he cope with the fact that he’s ahead of the curve? “Reasonable people can disagree on the strategies, but not as much on the underpinning imperatives.”
In my role as co-founder of the Network for Sustainable Financial Markets, I have had the pleasure and honour to work with a growing band of positive mavericks. Mark van Clieaf and Keith Johnson co-authored a letter to the SEC that many of us signed, which made a clear case for pay ratios using investor/fiduciary logic. As the USA dips into a (temporary, we hope) “Dark Age” on good governance reforms, fortunately the UK has adopted this thinking. Edward Mason has made it his job to get more investors to vote for the disclosure resolution at Exxon. Helen Wildsmith has corralled a growing coalition behind the Aiming for A approach, going well beyond her technical job description, time and time again. There are

many others I could name: Karen Lockridge, Hamish Stewart, Rob Lake, Kirsty Jenkinson. Of course, it’s easier once you retire – Howard Covington, Tom Murtha, John Rogers, etc – but there are many retired investment leaders who sit on the fence. Yes, of course, doors close; but doors also open. It’s like any relationship. Do you really want to spend your precious time – just think how much time you are at work – with an organization that wants you to be who you are not? Given what’s happening in the world, do you really feel good about the BS of pretending that ESG incrementalism is as much of the solution as it could be? Really?
Of course there are challenges. The criticism of colleagues who no doubt felt I was being disloyal did, at first, upset me, especially when it was personal. But as Zohar Glouberman, one of my wise mentors reminded me – and you really do need the support of mentors and friends if you are going down this path – you simply cannot do it alone: “You want to shake up the system and be liked for that?!” For every person who dropped off my network, I gained 2-3 new contacts. Because numbers in the investment world matter, I have more people following me on LinkedIn and Twitter than most ESG heads. As much as I miss some of these old friends, and no doubt it was as much my responsibility as theirs, my new connections fit the new me well. And as I have come more and more out of the ESG closet, so I have found more and more positive mavericks to work with. Several have become really good friends which is a huge collateral, extra-financial benefit of being in this “positive maverick” community.
Career risk and intellectual indoctrination are also real. I left AXA IM specifically to set up Preventable Surprises. But despite that, it took a full 18 months for the intellectual indoctrination and self censorship to fully wash out! And it would have been longer without the challenging and support of mentors and colleagues.I still remember a great email from another maverick and thought leader, John Elkington, who said “you have brilliantly described why the status quo isn’t working but what you are suggesting is pretty status quo!” Ouch. That’s why challenge from positive maverick peers is so important. It led to more authenticity on my part: I started to speak about how investors enabled corporate and market dysfunctionality. When I first said it, there was hushed silence….but no tomatoes. Now the CFA Institute says much the same and John Kay has gone even further. And its why I came down in favour of forceful stewardship as the only strategy that could plausibly address urgent systemic risks – the ESG conference circuit is still talking about the things we spoke about 15 years ago as if they are around the corner and going to result in a change.
OK, I had a lifestyle which allowed me to consider life without big bonuses. If your kids are in private schools or your “essential expenditure” has otherwise risen to keep up with your status as part of the “0.1%” (yes, globally you are and probably nationally as well) and you haven’t saved for that rainy day, then indeed you are on a weaker base than you would otherwise be. Given the ease with which careers can go belly up for all sorts of reasons – corporate takeovers or just CEO churn resulting in “their people” being brought in, personal health, etc. – is it really wise to be trapped by golden handcuffs even if they are ESG flavoured? All our choices create path dependency and there are real trade offs. But wherever we are, whatever choices we have made in the past, we can always do a bit more to resist willful blindness, refuse to engage in ESG-wash and show intelligent disobedience. And as we take those determined steps, we start a different path.
The bottom line is that positive mavericks act with as much insight and integrity as they can muster in the situation that they find themselves, not complaining
about what hasn’t happened in the past. It’s a better world they are after and they don’t pretend to be perfect either. If their actions stand out, it is precisely because the norm is ab-normal, un-ethical – or to use the other term we think needs to be reclaimed: un-reasonable.
Take the example of the 2°C scenario analysis resolution at Chevron which was withdrawn. Shell, Chevron and other oil and gas companies have found they can divide and rule the ESG investment community by speaking about “reasonable” investors and the others! Reasonable investors were those who indicated they would support management if the resolutions weren’t withdrawn. Choosing not to be a positive maverick has real world impact, just as much as choosing to be one has. And as with all culture issues – corruption, gender and other forms of discrimination at work – the more some of us speak out, the more it empowers others to do so, and this shifts the curve of what is “reasonable”.
So here’s a thought experiment we could all do: how could you be a bit more positive maverick this week? Finding something practical to do, with other positive mavericks, is often critical. I was at the start of the ESG development going mainstream and we had a heady goal: to change the way the traditional institutional investors operated. As we came to understand that the immunity to change was even greater than we had imagined, we focused on what we knew we deliver – signal sending, growth in AUM, thought leadership reports and such like. We collectively lost our way a bit but we also learnt a lot. And now there is a new and very exciting opportunity for authenticity again. A new generation of positive mavericks will be at the centre of this!The 7 traits of Positive Mavericks – a behavioural checklist

1. Work productively (not obstructively) toward positive change.
2. Are motivated more by ultimate ends, with intermediate ends and means serving as vehicles, not destinations.
3. Challenge the constraints, structural limitations, unconscious biases and shadow agendas of the institutions and organizations they work with.
4. Backcast from a desired future, building bridge foundations on (looking constantly to challenge ESG incrementalism).
5. Work collaboratively in networks with other positive mavericks.
6. Think and act at systems levels. This is an art as much as a science.
7. Be courageous. Constantly watch out for and contain the tendency to “CYA”.