It would be nice to say that when I first heard about Responsible Investor that I was immediately onside with the idea. But in truth I was sceptical.

The growth of responsible investment, the birth of the PRI and the development of an institutional investment sustainable finance ‘community’ had largely passed me by.

However, I eventually came on board and took over as editor from the visionary Hugh Wheelan in April 2010 – two days after the BP Deepwater Horizon disaster – so I’ve been in the hot-seat for almost exactly 10 years. And what a roller-coaster it has been.

If the 2020s are to be the “decade of delivery” for sustainable finance, the 2010s were the ‘decade of development’ for the market — and I like to think we helped mid-wife it to some degree.

Someone told us recently that RI helps to ‘socialise’ ESG topics for the industry, going places other publications don’t, while another reader spoke of our “openness to organisations that sit outside the mainstream”.

The industry had its share of growing pains over a decade that featured not just the BP spill but the ‘Aiming for A’ investor initiative and the VW emissions scandal to name a few. It’s little remembered now, but the fatal Upper Big Branch mining disaster helped form my journalistic stance on these issues.

Our coverage developed as the PRI sometimes struggled to find its feet: the Danish pension fund exodus, the Wolfgang Engshuber fiasco and the asset managers’ “coup d’état”. For newer readers, I realise, these will be ancient history and possibly irrelevant but it’s important to know where we have come from, to know where we are going.

I remember saying to PRI Chair Martin Skancke, who took over from Engshuber in difficult circumstances, that I never wanted to write another ‘poor PRI governance’ story again.

The PRI is now a hugely professional and influential organisation but there are valid questions being raised about its effectiveness. We at RI have always supported its mission but the next decade will see if it can really help to deliver worthwhile change.

In 2017 I was at the PRI in Person event in Berlin, when former UN climate negotiator Christiana Figueres called on signatories to commit to putting 1% of their assets under management into clean and renewable energy by 2020. That date is now upon us but the challenge has mostly not been met.

As I write, Australia is in flames and grass is growing on Everest – the questions that are being raised about the PRI specifically are being addressed at the wider sustainable investment community: what has it truly achieved?

The suspiciously youthful hack who took over as editor in 2010 could not have dreamt of how big ESG would become, especially in the past two or three years.

Carbon Tracker’s Unburnable Carbon report was a year in the future and wouldn’t achieve broader prominence until 2012 with Bill McKibben’s Rolling Stone article that kicked off the fossil fuel divestment movement.

There was also no Donald Trump, no Brexit, little sign of the wave of populism that would emerge. The challenges the world faces are even more acute than they were a decade ago.

Sustainable investment was a fringe activity. But, gradually, we took on “required reading” status, in the words of CalPERS’ Anne Simpson. As all this was happening, we went behind a pay-wall in May 2011.

The growth of the sector is bookended, in my mind, by two interviews I did over a period of 15 years.

The first was with Al Gore and the other with his Generation Investment Management co-founder David Blood. The Gore interview (with another title) was to mark the launch of Generation in 2004 and, while I confess I was at best agnostic about sustainable finance at the time I am happy, looking back, that this wasn’t reflected in the story itself.

The Blood interview took place at the end of last year, and was an all-round better piece of work by a more engaged journalist, I hope.

Another recent interview also sticks in the mind: LGIM’s CIO Sonja Laud left me with a positive sense of a changing of the guard.

It has been enormously rewarding to head a team of award-winning journalists, though I will make a confession. For years I applied for the State Street Institutional Press Awards but I only recently realised I had been filling out the application form incorrectly all along! The one time I got the application right I was short-listed.

But I was delighted to collect the ShareAction “Fearlessly holding investors to account with journalistic integrity” award (and a cuddly lion) last year. 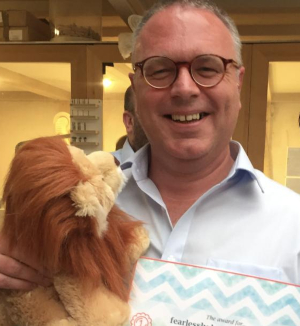 Daniel Brooksbank with ShareAction's "Fearlessly holding investors to account with journalistic integrity" awardThere are so many articles, countless words. One of the highlights from my early tenure include Revealed: how RiskMetrics-MSCI went down to the wire. This was the transformative deal that saw MSCI enter the ESG market in a big way and – arguably – set us on the ESG data road we are currently on.

My contributions have ranged from arm wrestling with my colleague Carlos to discussing my (ironic) “warm and fuzzy feelings” about Shell.

I ran into a well-known pension CIO recently. “How’s it going?” I asked. “Oh, you know, changing the world, bit by bit!” But despite all the progress over the past 10 years, UK government minister Guy Opperman is surely right that pension schemes are “cast adrift on a tide of ESG greenwash from investment managers”.

The job has not been without low points. It’s never nice receiving lawyers’ letters but the nadir was our too credulous coverage of the fake Larry Fink letter from the Yes Men spoof group last year. Mea culpa for that one.

But just look at the blanket coverage for this year’s Fink letter: it could be that the tide is really starting to turn.

During almost my entire stint, until just recently, we ran the same website, a source of frustration for readers and RI staff alike. I’m happy to say we enter the new decade with a site that is fit(ter) for purpose.

And the new site will be in the best possible hands. There’s no doubt Sophie has the drive and vision – and the commitment to the issues – to take RI into the next crucial decade with all guns blazing.

My new role will be to look at how we can bring RI to even more readers (and even editing the site in Sophie’s absence) – so watch this space. There are exciting times ahead.