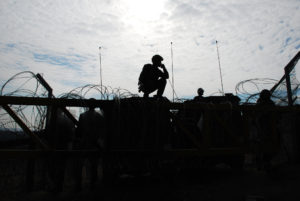 Kamil Zabielski was speaking in response to a report by a commission of inquiry on the Occupied Palestinian Territory convened by the UN Human Rights Council, which found that “occupation and discrimination are the key root causes of the recurrent tensions, instability, and drawn out nature of the conflict in the region”.

“While the eyes of the world are focused on the Russian-Ukraine conflict, we cannot forget other conflicts and violations of international law. The inquiry confirms these violations by stating that Israel aims to have complete control over the occupied Palestinian territories,” said Zabielski. “Investors cannot fuel the conflict by investing in companies that contribute to the occupation regime and the expansion of illegal settlements.”

Since 2009, Storebrand has been screening, engaging and, if necessary, excluding companies with ties to the conflict.

Zabielski added: “Lately we see renewable energy projects taking over more occupied land in oPts and Western Sahara to benefit the occupying states in their quest for energy independence and thus deepening the conflict and making their occupation more permanent by creating this new dependence.”

On whether Storebrand plans any action in response to this, a spokesperson said the investor will continue its annual general screening, assessment and engagements for all industries for conflict areas, including occupied territories.

“The renewable sector is flagged as problematic, and it has been for some time. We have excluded companies in this sector previously on the same issue.”

“We encourage other large investors to evaluate closely their investments that are associated with these shocking human rights abuses, with urgency.”
Kiran Aziz, KLP

At the time of publication none of the above had responded to Responsible Investor’s request for comment.

In June 2021, the four firms were among 16 excluded by KLP and KLP Funds as part of a due diligence-based divestment regarding the conflict.

Returning to the report, Aziz said: “It is showing that there is a clear risk of breaching international law. The companies who operate in the Occupied Palestinian Territories need to take this into consideration and not contribute to violations of human rights in war and conflict situations through their affiliation with the Israeli settlements. Companies should therefore exercise particular caution to avoid becoming involved and protect vulnerable individuals.”

Looking ahead, KLP will assess other businesses that are exposed to such risk. “We encourage other large investors to evaluate closely their investments that are associated with these shocking human rights abuses, with urgency.”

The Norwegian ministry of foreign affairs announced last week that “foodstuffs originating in areas occupied by Israel” must be marked with the area from which the product comes, “and that it comes from an Israeli settlement if that is the case”.

Aziz said: “KLP warmly welcomes the Norwegian government’s decision to label products coming from Israel’s illegal occupation including settlements. Other governments should follow Norway’s good example, including, critically, the US.”

Henrik Thune, Norway’s deputy minister of foreign affairs, told RI: “Norway is part of the European Common Market through the European Economic Area Agreement. The government’s decision follows from our obligations under this agreement. Norwegian consumers have the right to know whether foodstuffs sold in Norway are produced in Israel or in an area occupied by Israel.

“This is by no means a boycott of Israel. We believe that boycott is the wrong policy. Norway has good relations with Israel. We want to continue our good relations, and we will continue to engage on a broad set of issues.”

Norway’s sovereign wealth fund, Norges Bank Investment Management’s, did not respond directly to the UN report but pointed to the announcement in September 2021 of its exclusion of three companies based on their “activities related to Israeli settlements in the West Bank”.

“We believe that ensuring respect for human rights is essential for good business practice and risk management,” a spokesperson said. “When companies operate in conflict areas, it is reasonable to expect a heightened risk of violations of human rights and humanitarian law, and that this requires enhanced human rights due diligence.”

In the Netherlands, Robeco is set to engage a selection of portfolio companies in relation to Occupied Palestinian Territories – as well as Myanmar and Xinjiang – as part of an “enhanced human rights due diligence engagement” project.

Launched at the end of last year, the project covers companies selected based on their business models and possible links to human rights impacts in their value chains. The regions were chosen following “expert interviews”.

Danielle Essink, human rights engagement specialist in Robeco’s active ownership team, told RI: “In many cases engagement with companies on adverse impact on human rights takes place in a reactive manner. With this engagement programme we aim to collaborate with our portfolio companies to highlight the importance of a more proactive approach.”

On the Dutch investor’s stance on the conflict, Essink added: “We are aware that the Israeli-Palestinian conflict and its implications for companies in portfolio are politically sensitive topics, and that our clients have a range of views on this. It is also a topic upon which engagement with companies is deemed likely to be difficult, given the wide range of views on the topic, and the lack of political progress on the issue.”