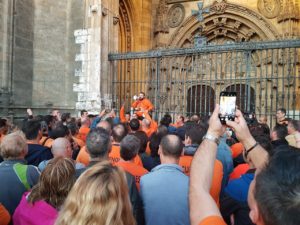 The Spanish labour dispute that has emerged at Vesuvius, the London-based FTSE 250 engineering firm, is escalating into a bitter Europe-wide conflict between management and workforce, becoming a potential source of material ESG risks for shareholders.

Approached by RI, the seven of the top 10 institutional shareholders in Vesuvius that are signatories of the Principles for Responsible Investment (PRI) declined to comment about the decision to shut down two profitable factories in northern Spain moving production to Poland, Czech Republic and Turkey.

Cevian Capital, the $15bn Stockholm-based activist investor with a 21% stake and a seat at the board of Vesuvius for co-founder Christer Gardell, also declined to comment.

The disagreement between management and the firm’s European Works Council deteriorated dramatically this week. Works councils are information and consultation bodies introduced by EU law to represent employees in European multinational companies.

RI understands that management do not consider the closures in Spain to be “transnational”, for which 20 employees should be affected in more than one EU country under the terms of the EWC agreement.

Management believes that there is no dispute to be dealt with because the impact of the decision is limited to Spain.

Hellmut Gohde, managing director of Training & Consulting International, an advisor to the Vesuvius works council for the last decade, told RI that management is trying to portray the situation as a local issue, thus undermining the workers’ ability to have their voice heard under EU law.

The EWC believes Vesuvius management should have informed and consulted them, and has requested that an independent mediator is appointed by the Law Society of England and Wales.

If the mediation is unsuccessful, the next step will be to take the matter to the Central Arbitration Committee (CAC), a tribunal of the UK’s Department for Business, Energy & Industrial Strategy.

Gohde said that the 20-employee threshold to consider the issue “transnational” doesn’t need to be interpreted as “negative impact”.

“We know from Polish colleagues that over the last 9 months there’s been ongoing recruiting in Poland. Over the summer period people always wondered why, as there was not enough work there. Now we know it was to absorb the production from Spain,” Gohde said.The works council filed a previous complaint with the CAC in January 2019 regarding the closure of three factories in Chesterfield (UK), Gliwicze (Poland) and Izurza (Basque Country, Spain)

The works council filed the complaint, which is still ongoing, because it wanted management to share with them financial information on the restructuring costs to understand the rationale behind the closures.

In March 2019, management decided to terminate the EWC agreement, which Gohde dubs as an “act of revenge”.

Gohde said: “They are so angry that they do not want to negotiate at all. The consequence is that there will be no EWC when the agreement expires in June 2020.” Given the European Works Council Directive says the process of getting a new one in place can take up to three years, Gohde says the assumption is there will be no works council until June 2023.

Gohde added that since the current CEO, Patrick André, took over a couple of years ago there has been a climate of hostility from management against “any formalised means of employee representation whether the EWC or trade unions”.

“It is very concerning that Vesuvius is not only unable to negotiate at local level in Spain, but it has also shut down stakeholder dialogue at European level [by ceasing to negotiate a new EWC agreement]”.

At national and regional level none of Vesuvius’s stakeholders are satisfied with the apparent unwillingness of the company to listen to alternative proposals.

Meetings between the Spanish Ministry of Industry and a roundtable of stakeholders have not achieved results.

Three Vesuvius employees yesterday begin a sit-in at the gothic cathedral of Oviedo, Asturias – with the blessing of Church authorities. Civil society at large has also been supportive of the workers’ demonstrations.

A spokesperson for Vesuvius told RI in a statement: “The decision is being implemented in consultation with local employee representation and in close cooperation with local authorities, in compliance with all laws, regulations, and our corporate governance rules.”

Vesuvius said the decision was made by the Flow Control EMEA management team “based on their specialist local market knowledge”.

However, in July, before Vesuvius announced the closure of factories in Spain, CEO Patrick André held a conference call with analysts to explain the company’s half year results.

Vesuvius announced it had delivered £5.8m of “restructuring savings” in the first half year of 2019 and intended to target further £16m by 2021.

A Goldman Sachs associate asked André to elaborate on the costs and benefits of the restructuring program.

André said: “Basically the same model. We are closing plants and transferring the capacity of those plans to other existing flagship plants, which we are modernising and automatising. Doing so we are not reducing overall production capacity because we believe that we are in a growing market and there is no way we want to decrease production capacity.”
André added: “By the end of the year we will have closed six plants worldwide, mostly in Europe and North America. Difficult and complex, as you can imagine, but we are doing it.”
Asked about the processes behind the numbers, he said: “[It’s] cash, we are looking at what the one-off cash costs of each project are, the recurring cash savings of each project. We started this process three years ago with the easiest and most attractive ones.”
At the AGM of Vesuvius in May shareholders approved the new remuneration of André, an increase of 14%, mean a take-home package close to £2m, besides the £1.5m paid to the CFO.The remuneration report, nonetheless, was the subject of significant shareholder dissent, with 23% voting against it.

From the voting records analysed, RI could only identify Royal London Asset Management among the dissenters, which opposed it “due to the scale of salary increases granted during the year and the significant benefits granted to the CEO,” Ashley Hamilton Claxton, Head of Responsible Investment, told RI.

Asked about the relationship between an ongoing restructuring program and the CEO pay rise, Luke Hildyard, Director of the High Pay Centre think tank, said that such remuneration seems “quite short-sighted”.

Hildyard said it is the flawed way in which capitalism is perceived to work at the moment, “serving the interests of those at the top and not doing a great deal for those at the middle and the bottom”.

He also raised concerns about whether the company is having regard to the interest of its stakeholders, in line with UK law and the Corporate Governance Code.

“Milking the highest profit the company can get from them, the company is to some degree ignoring the requirements to have regard for its stakeholders. Stakeholders shouldn’t just be instruments for profit maximisation,” Hildyard said.