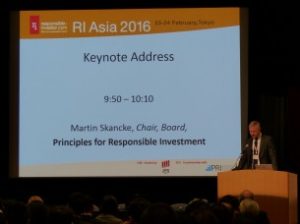 Building on the findings of the UNEP FI, PRI and UN Global Compact report on Fiduciary Duty in the 21st Century, published in 2015, the Generation Foundation will fund a three-year project looking to see how governments and regulators in the eight countries covered in the 2015 report can clarify fiduciary duty around ESG issues.

The project will engage asset owners, asset managers and policy makers across national and international jurisdictions to harmonise a global understanding of fiduciary duty which incorporates sustainability. It will cover three main areas:

• To encourage governments and regulatory agencies in the eight jurisdictions covered in the 2015 report (Australia, Brazil, Canada, Germany, Japan, South Africa, the UK and US) to clarify the scope of fiduciary duty.

• To develop an international statement on fiduciary duty and sustainable development.

The PRI has also revealed more details on its work with credit rating agencies around how they integrate ESG.Speaking at an event hosted by Bloomberg, Fiona Reynolds, managing director of the PRI, said: “We are meeting with large credit agencies and investors and have started a roadmap to make it happen. We got a grant from Rockefeller to take the work forward and are planning a statement of expectation with credit agencies. Movement is happening, though it’s slow.”

Also speaking at the event and responding to Reynolds, Will Oulton, Global Head of Responsible Investment at First State Investments, said the problem was lack of commercial demand: “It’s been tried. But the market demand isn’t there.”

He went on: “Markets like green bonds have helped with organisations like Moody’s involved. There is pressure from PRI signatories, which is helpful, but ultimately it’s the commercial case.”

Skancke also revealed progress on implementing a stewardship code in Korea, saying the country would “look to Japan to learn from experiences”. Reynolds told Responsible Investor that the PRI was working with the Korean stock exchange on the stewardship code.

He also suggested that the PRI could add a new seventh principle, saying: “The PRI was founded on six principles, relationship between investors and listed companies but responsible goes beyond that – it’s also about the financial system in which we operate – a seventh principle to reflect systemic issues is in discussion.”