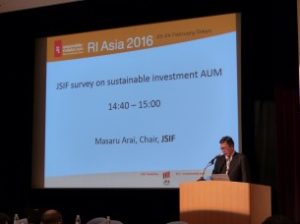 The Japan Sustainable Investment Forum (JSIF), the not-for-profit body set up in 2001, revealed the findings of its very first survey on sustainable investment at RI Asia 2016 today.

Masaru Arai, the former Chief Investment Officer of Daiwa Asset Management and chair of the JSIF, revealed the results.

Arai, a former board director at the Principles for Responsible Investment (PRI), told the audience that before the Lehman crash sustainable investment was almost non-existent in Japan. “Since 2008 after Lehman it’s grown substantially in Japan,” he said.

He said 28 Japanese financial firms responded to the questionnaire and in conducting the survey JSIF had the support of the Ministry of Environment in Japan, the Japan CFA and FTSE Russell. He added that responsible investors and the Japan investment advisors association gave insight into what to put into the questionnaire.

The investors covered by the survey represented Y26.6trn, or 11.4% of their whole assets under management. Twenty-five percent of respondents were asset owners and 75% were investment managers (3.6% were both).ESG integration was the most popular strategy, followed by corporate engagement and shareholder action.

Arai said a recent report from the Global Sustainable Investment Alliance (GSIA), the grouping of global Social Investment Forums (SIFs) showed negative screening was the most popular strategy: “In Japan ESG integration is rapidly growing,” he said. “Globally, its the second largest strategy.”

Arai also said that 100% of respondents said they did proxy voting. “Maybe we didn’t ask the question right,” he said. “What is fully fledged engagement?”

Just over 91% of respondents were signed up to the PRI, 30% to climate data body the CDP and 61% to the Principles for Financial Action for the 21st Century (PFA21), an initiative of the Environment Ministry launched in 2011.

Just under 93% were signed up to the Stewardship Code while half had a policy on sustainable investment.

Going forward Arai said JSIF planned to issue a white paper bi-annually on sustainable investment. He said the first one would be published soon. Link