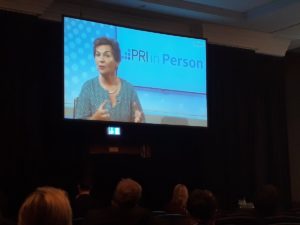 Make no mistake, Christiana Figueres exploded a bombshell under the signatories of the Principles for Responsible Investment (PRI) in Berlin this week, as we have reported.

The highly respected former United Nations climate negotiator called for 1% of the PRI’s signatories’ total assets to be allocated to low carbon investment.

How signatories respond could be the responsible investment movement’s defining moment. It needs to seize on this with both hands.

PRI Managing Director Fiona Reynolds was moderating the video interview at the PRI in Person event in Berlin, at which Figueres laid down the gauntlet; Reynolds was clearly caught off-guard by the former Executive Secretary of the UN Framework Convention on Climate Change.

Although the PRI leadership was initially on the back foot, they will have been aware that the UN is putting its weight behind ‘waking up the sustainability trillions’, as we reported last week from Climate Week. The signatories to the UN-backed PRI must clearly be part of that.

RI understands that Figueres did not warn the PRI that she was planning to issue her challenge and that it did not feature in the pre-event discussions. But it was clearly a planned move and it got the attention Figueres intended.

There hasn’t been this sort of unplanned occurrence at PRI in Person since the Nordic ‘revolt’ in 2013 (which culminated in the exit of a number of Danish pension funds) and an asset managers’ ambush a few years ago.

But this isn’t about the internal governance of the PRI. It’s much more important than that. It is orders of magnitude more important.

As Reynolds was summing up the session and moving onto more routine matters, Figueres interrupted her to stress that she was “not mucking about” and that the idea was in investors’ best interests.

Here was one of the key figures of the Paris accord challenging investors in the most forthright way possible. In effect, she is asking signatories to put their money where their mouths are, and that is unprecedented.

There are, to be sure, inherent difficulties in achieving Figueres’ target in such a short timeframe – a point raised by RI during the question and answer session.The availability of investible projects is a stumbling block and Figueres acknowledges this – although some leading infrastructure figures like IFM’s Gary Weaven don’t see it as a problem. Figueres knows she doesn’t have all the answers.

As an example, at one point during the Q&A she was asked about the efficacy of indices that underweight carbon and she admitted her ignorance of the specifics on this and turned the question back to the audience.

It was telling that none was forthcoming — especially as some of the firms who have been involved in them were in attendance at the event (if not the actual session).

Another issue will be how the allocation is to be defined, disclosed and measured. Indeed, it’s worth wondering how much is already allocated across the signatories? It could be more than people think — though that sort of data will have to be developed as a starting point.

The PRI itself does not have a say in how its signatories make their allocations. But let’s be clear: if the PRI is ‘about’ anything, then it is about exactly what Figueres is talking about. She may not be an investment expert and those with greater technical expertise may question calling for 1% of PRI-aligned assets to go green so quickly. But she was adamant that we have run out of time.

There are a few other elements to consider. For one, CalPERS officials at PRI in Person were stressing a ‘just transition’ – the phrase from the Paris accord which reflects that nobody should be left behind in the shift to a low-carbon economy. How will a wall of money going into green investments ensure this?

And, the PRI is already planning to start de-listing signatories that don’t show progress in implementing its six principles in a move to get rid of those who just ‘tick a box’. How will the Figueres target fit in with this? There are a lot of questions that will have to be considered in a very short space of time.

Christiana Figueres has just handed the PRI a workstream like no other.

If you accept her view that investors have a role in saving the planet, this is when the PRI not just as an organisation but as a wider movement should come into its own.