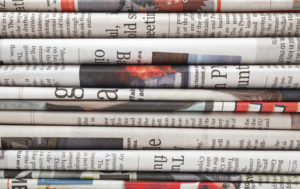 Around a fifth of the California Public Employees’ Retirement System (CalPERS’) equities portfolio is at risk of climate-related losses, according to the $381bn pension fund’s first ever climate risk disclosure report. Its global equity holdings alone were responsible for at least 23.5m tons of carbon dioxide emissions, according to the report, which was published off the back off a state law passed last year.

Credit Suisse will no longer finance new coal-fired power plants, it has confirmed as part of a recent ESG policy update. This builds on the banks existing policy of not financing the development of new greenfield thermal coal mines. Both commitments also apply to cases where the majority of the use of proceeds is intended for the development of a new coal-fired power plant or a new greenfield thermal coal mine.

Exxon Mobil has successfully defended itself against a lawsuit alleging the energy giant committed securities fraud by deceiving investors about the true cost of climate change. However, the ruling judge noted that the verdict does not “absolve ExxonMobil from responsibility for contributing to climate change through the emission of greenhouse gases in the production of its fossil fuel products.”

Japan’s Government Pension Investment Fund (GPIF) and the Islamic Development Bank (IsDB) have partnered to promote Green and Sustainable Sukuk. IsDB’s issuances of the Islamic equivalent of bonds are in alignment with the Green Bond Principles, Social Bond Principles and Sustainability Bond Guidelines. According to GPIF, the asset class provides “investment opportunities for GPIF asset managers to contribute to make a sustainable society”.

Bank of America has met its goal to deploy $125bn to “low-carbon, sustainable business activities” six years before the 2025 deadline. To build on this milestone, the company has made a commitment to channel an additional $300bn by 2030 to support the carbon transition.

Nasdaq has launched the Nasdaq Sustainable Bond Network (NSBN), a platform aimed at increasing transparency of and promoting environmental, social and sustainability bonds. Issuers can upload documents and data on their sustainable bonds to the platform, which will then be disseminated through Nasdaq’s market data feeds. The platform also allows issuers to demonstrate alignment with global sustainability standards and report on impact.

Uniting Financial Services (UFS), the asset manager for two Uniting Church entities in Australia, has raised A$30m through its debut issuance, a 10-year SDG bond. UFS, which has A$1.6bn worth of assets under management, issued the note against its SDG Bond Framework which is in alignment with the Sustainability Bond Guidelines 2018 and associated Social Bond Principles 2018 according to a second party opinion from EY.

US foundations including the Ford Foundation and Rockefeller Brothers Fund have launched a $12.5m grant fund focused on scaling impact investing. Grants giving out from the ‘Tipping Point Fund’ will focus on public engagement and policy and data, metrics and measurement.

Removing gun and ammunition manufacturers from commonly tracked benchmarks would have a “negligible” impact on investors’ financial performance, according to new research from Trillium Asset Management and Impact-Cubed. Meanwhile, divestment could have a large impact on manufacturers’ share price, cost of capital and potentially even market participation, the study said. Arleta Majoch, Product Specialist at Impact-Cubed, said: “It is the indexers that are making a choice, and they need to be held accountable for that choice. We believe it is time for the indexers to acknowledge the choices and responsibilities they have, and to take action.”

Norway’s largest pension fund KLP has excluded British security firm G4S because of the “risk of human rights violations”, selling NOK 31.4m (€3.1m) of the company’s securities. KLP tends to follow the recommendations for exclusion put out by Norway Council of Ethics,  which recently advised the Government Pension Fund Global to exclude G4S. Jeanett Bergan, Head of Responsible Investments, said G4S operates in countries such as Qatar and United Arab Emirates, where there is a risk of International Labour Standards violations.

The International Securities Lending Association (ISLA), the trade body for securities lending, will look to crystallise the role of ESG within the widespread market practice after Japan’s Government Pension Investment Fund (GPIF) recently suspended its lending programme citing its inconsistency with investment stewardship. ISLA CEO Andrew Dyson said in a blogpost that it was “incumbent upon industry associations to lead the way on developing principles that support securities lending in the context of ESG”.

Susteineri, the UK-based ESG investment advisory firm, is to wind down after being established two and a half years ago. Co-founders Shuen Chan and Richard Folland will both pursue separate opportunities, the company said

Public interest groups in the US have called for an investigation into a number of comment letters that were sent to the Securities and Exchange Commission (SEC)  in support of proxy rule changes that the regulator has proposed in the teeth of objections from governance advocates. Watchdog group Public Citizen reportedly wrote to the SEC inspector general asking officials to investigate why SEC Chairman Jay Clayton referred to the letters at a meeting on the topic.