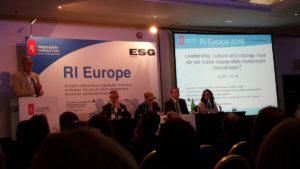 RI Europe 2016 took place in London on June 22-23 and was attended by more than 560 delegates. Here is a selection of some of the highlights. Part 1 (Part 2 will appear tomorrow).

The opening keynote was delivered by Helen Mountford, Director of Economics at the World Resources Institute and Program Director of the New Climate Economy (NCE). She explained how it is “essential” to get growth and climate action together – “if you don’t get both it’s not sustainable” and that combining environmental and social value has to be the way forward. There were “strong signals that the smart money is shifting to responsible investment”. The NCE has three focus areas, she said: cities, land use and energy and three key drivers of growth and climate performance: resource productivity, infrastructure investment, innovation. She spoke of the trillions in “sprawl costs” of US cities, comparing sprawling Atlanta with compact Barcelona, with its lower carbon footprint. And she noted “capital stacking” i.e. bringing in different types of investor to a project.

The conference heard how investors are considering whether to demand higher dividends from fossil-fuel companies and reinvest in green firms, as a means of helping the transition to a low-carbon economy, an idea championed by Carbon Tracker. Martin Skancke, chair of the board of the Principles for Responsible Investment (PRI), said the “big question” for investors is what they should do as owners of fossil-fuel companies.
“Should you let fossil-fuel companies keep the money they make now, and ask them – through engagement – to reinvest in the transition to a low-carbon economy,” he asked an audience during a panel on the energy transition. “Or should you be more aggressive in pushing for dividends from the companies, based on their current earnings, and take that money and reinvest it in new companies that will actually champion the low-carbon economy.”

The future of ESG rating agencies

Traditional ESG research firms are at risk from advances made by the big ratings agencies in the field, said Pascal Coret, head of fixed income at French state investor Caisse des Depots. On a corporate bonds panel he said: “competition is here”. “Moody’s and Standard & Poor’s are big – whether [smaller ESG ratings agencies] have enough equity to survive that remains to be seen.”
“The other possibility,” he added, “is that they can be bought by S&P and Moody’s.” Fellow panellist and senior ESG analyst for BNP Paribas Investment Partners, Felipe Gordillo, countered Coret, saying that, although some of the large ratings agencies are moving into the ESG space, they are not conducting the same analysis as the traditional analysts. “There is likely to be room for both.”

Coret also said that he “did not like” green bonds issued by non-green companies as an investment instrument. “That’s because if the green project fails, the non-green part of the company will pay for it.” President Hollande earlier this year said France would issue green bonds itself – with Caisse des Depots, a French government agency, likely to be involved.h6. Hire the right people

Christianna Wood, the former CalPERS portfolio manager who chairs the Global Reporting Initiative, the corporate sustainability organization, called on major asset owners to hire leaders with an interest in ESG integration. “The Vanguards, BlackRocks and Fidelities of this world need to be hiring CEOs and CIOs that care about the issue, and will implement it broadly into their investment processes and portfolios,” she said. She also urged asset owners at sovereign wealth and pension funds to show “more collaboration and cooperation”, and to press their investment managers in order to accelerate the change to mainstream ESG integration.

This is a new investor-led effort to identify the routes that different companies or sectors will take to bring about a low-carbon economy. Adam Matthews, Head of Engagement for the Church Commissioners for England and the Church of England Pensions Board, confirmed the scheme would launch in September, with plans to expand its initial four-industry scope into a whole-market application. “It’s a worldwide tool, but we’re starting big and then working down to a smaller level,” Matthews added. “There’s an open invitation to anyone who shares our objectives and is in a position to publically state how they’d use the tool.”

Faith Ward, Chief Responsible Investment and Risk Officer for the Environment Agency Pension Fund, said that the movement was the right way to meaningfully impact company and market behaviour. “Engagement is good but you need milestones or checkpoints to see if your efforts are working”, she added. “You can’t engage forever.”

How the financial system fails us

David Pitt-Watson, executive fellow of finance at London Business School and chair of the UN’s Environment Program Finance Initiative, discussed his new book: How the financial system fails us, and how to fix it (with Jon Lukomnik and Stephen Davis). He made the point that the system is failing customers at present, as it should serve normal people and investors at as low a cost as possible. For a market to function correctly, its participants needed to understand what they are being charged.

Speaking about the progress made in responsible investment, however, he said that “the changes that we’ve seen in institutional investment in the last 20 years have been incredible”, adding that the UN-backed PRI was instrumental. Rather than suggesting “one grand plan”, he continued, progress would be made through several incremental improvements in transparency, fiduciary duty and the like, and that “micro-regulation” adds risk.

In a session on corporate lobbying, Charlotta Dawidowsku Sydstrand, ESG Manager and Strategist at Swedish state fund Sjunde AP-fonden (AP7), said there is a disconnect between what companies say they stand for, particularly when it comes to ESG issues, and what their trade unions will lobby for on their behalf. She adds that when asset owners push for disclosure from companies regarding their lobbying activities, it’s for their own sake, and they should be reporting on all or any risks that affect share price. “I think they understand investors’ viewpoint but don’t have the capacity or maybe the will to act on it.”
h6. Clarity to asset managers

Philippe Desfossés, CEO at French state fund ERAFP said an issue was what Bank of England Governor Mark Carney described as the “tragedy of horizon” – the fact that the impacts of climate change will be felt beyond the traditional horizons of most factors – imposing a cost on future generations that the current generation has no direct incentive to fix.h6. A framework for positive impact

Karlijn van Lierop, Head of Responsible Investment and Governance at MN, told a session on ESG integration that in April the Dutch fiduciary manager had approved a framework for positive impact with clients. “It’s not just minimising ESG risk but how you can contribute to society.”

Van Lierop said in understanding what impact investing is about it adopted the Global Impact Investing Network (GIIN) definition. It had a working group with clients to set up framework and now coming into the system.

“We need to get into a new phase of stopping measuring every quarter and try to select companies contributing to a stable society in the end. Not all companies selected in the end. It will be around 30 names.”

She added MN measured the carbon intensity of its portfolio last year as the first building block for creating a climate strategy – and that MN would do a targeted engagement for two years and if they weren’t happy would divest. “If they give us confidence that they can remain in the portfolio.”