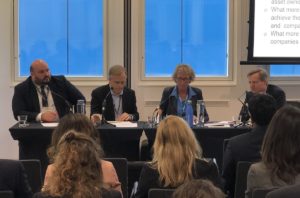 Edward Mason, the head of responsible investment at the Church Commissioners, has called on fellow asset owners to “put pressure” on large asset managers who have not signed up to the Climate Action 100+ initiative.
Addressing the panel on climate voting and engagement at RI Europe 2019 today, he said asset managers that don’t feel able to join outright “could at least publicly support the aims and overarching framing of CA100+”.

“My perspective is that many people in the investment industry don’t accept that they have a role to play in the implementation of the Paris [Climate] Agreement.”

Despite 342 investors, representing over $33trn in assets, backing the global engagement initiative, large asset managers such as Blackrock, Vanguard and State Street have not.

Panelists Adam Matthews, Director of Ethics and Engagement at the Church of England Pensions Board, and Sylvia van Waveren, Engagement Specialist at Dutch asset manager Robeco agreed with Mason.

The Church of England and Robeco led the engagement with Shell as part of CA100+, resulting in an engagement deal last December with Anglo-Dutch oil giant, which was also represented on the panel.“CA100+ is a phenomenal mobilisation but it is not all the major players. As an asset owner, it concerns me that some major fund managers are not part of it,” said Matthews.

“Asset owners who have lots invested in these fund managers could be quite explicit in their expectations that there has to be that alignment [with CA100+], this is the moment when engagement needs to demonstrate traction, there isn’t going to be a second chance at this.”

Van Waveren added: “It is very frustrating that there are asset managers out there that are free-riders, in a way”.

Matthews also announced that the pension board is looking at how it can bring its “its passive investments into play”. He said that in the next few months it will reveal details of a new index which will weight investments based on the engagement work of CA100+ and that of the Transition Pathway Initiative which he chairs.