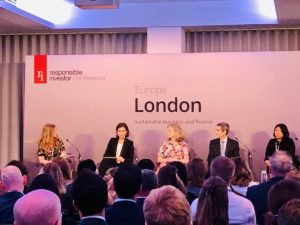 “Is finance fit for purpose or a stranded asset in the context of a climate emergency?”
That was the question posed by Emma Howard Boyd, the responsible investment figure who has become the influential chair of the Environment Agency, the UK’s environmental protection body, at the RI Europe 2019 event in London.

Speaking during a plenary session on the EU Action Plan on Sustainable Finance, the former UKSIF chair and former Jupiter stewardship head who was recently appointed UK Commissioner to the Global Commission on Adaptation, commented: “We are not collectively responding at the pace we need to right now.

“The next 10 years is going to affect the next 100 plus – are we responding to the agenda as a climate emergency? Is finance fit for purpose or a stranded asset for the future?”

Speaking on the same panel was Julie Becker, Member of the Executive Committee, Luxembourg Stock Exchange and a member of the EU High-Level Expert Group on Sustainable Finance (HLEG), said the (controversial) EU taxonomy would take more time than foreseen.

“To the end of 2022,” she said. “There is high expectation in the market. There is a lot of confusion and a real need for a common language. We need to understand clearly what we are talking about…we need a dynamic taxonomy which allows the transition.” She said the EU taxonomy would be “pragmatic, dynamic and usable”.
Luis Cabra, Executive Managing Director, Technology Development, Resources and Sustainability at Spanish energy firm Repsol, said it would move its energy mix from what it is today to a pathway to a sustainability future, compliant with the Paris Agreement.“We have interim targets. Next year we will reduce our carbon footprint by 3% and moving to other targets in 2025.” He said it was moving from hydrocarbon to natural gas, and then to wind and solar energy, calling technology a key lever.

Cabra said the EU taxonomy should be pragmatic and incorporate energy companies. “A real contribution to reduce and address climate change should be part of the picture,” he said.

In an intervention from Martin Spolc, Head of Unit, Sustainable Finance and Fintech, DG Financial Stability, Financial Service and the Capital Market Union at the European Commission, said “the energy transition will be explicitly covered” in the taxonomy.

“We are not collectively responding at the pace we need to right now.”

Cabra from Repsol said it welcomed clearer rules on green bonds and that it planned to be active in the green bond arena in the future.

The event was taking place in the context of heightened focus on climate change, not least the UK government’s groundbreaking net zero commitment and today’s Tokyo Declaration by investors at an official G20 side event in Japan.

Elsewhere at RI Europe, the focus was on the Task Force on Climate-related Financial Disclosures (TCFD), with Alecta’s Magnus Billing saying regulators have a role to play in implementing it. And he noted that the market lacks a “bridge” between the TCFD’s scenario analysis elements and financial impact. “We need to engage the financial people in companies,” he told a breakout session.