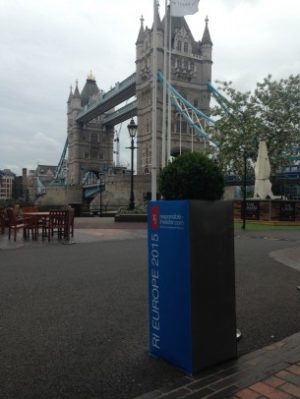 Investment consultants came in for sharp criticism on their approach to responsible investment at RI Europe 2015 in London. Dawn Turner, head of pension fund management at the Environment Agency Pension Fund, said they were not doing enough to challenge funds when advising on ESG issues. She told the audience: “That’s despite the Law Commission saying pension funds are at fault if they don’t do this as part of their fiduciary duty.”
Turner, speaking on a panel looking at the fossil fuel divestment debate, revealed that the Environment Agency fund would shortly invest passive equity exposure into a low carbon target index to reduce its carbon dioxide levels against the reference benchmark. She also revealed it had taken money out of equities as the FTSE100 index was very carbon intensive.

Mark Campanale, founder and executive director of the Carbon Tracker Initiative revealed a number of new initiatives from the financial NGO. It has written to the SEC asking it to put pressure on companies to disclose the C02 exposure implicit in their planned extraction projects. He said Carbon Tracker would itself be counting up the C02 in capital expenditure via a new ‘CAPEX tracker’. He said that there would also be closer scrutiny on who owns coal and gas companies in the press in the coming weeks: “It will lead to some uncomfortable thinking”. He added: “There have been a couple of institutions aggressively buying what has been sold by divesting investors, and the public should know who they are!”

Addressing long-term investing issues, Mark Mansley, chief investment officer at the Environment Agency Pension Fund, advocated working with an underperforming asset manager to help them improve, instead of immediately sacking them: “We’ve done it twice in the last two years. We could have sacked themanager but decided to engage with them and see what would work best.” He said one manager had stocks in its portfolio that the fund was “deeply uncomfortable” with, so the EAPF worked with the manager on carbon footprinting and ESG requirements.

Khalid Husain, director of ESG investing at TIAA CREF, said certain language like ESG integration can lose people. “We need to break down what that means. It is looking at fraud, labour standards, etc. But broadly saying ESG & SRI issues brings the misconception that it is a compliance exercise or more of a constraint. You need to break down ESG factors and make them explicit and tangible.”

During a breakout session on ‘Big Pharma’, Sile Lane, Director at the NGO, Sense About Science, saidthe world’s largest drugs firms don’t disclose the results of clinical drug trials half of the time. This is a serious risk for investors given the potential for litigation, added Helena Viñes Fiestas, Head of Sustainability Research at BNP Paribas Investment Partners. Peter van der Werf, Engagement Specialist at RobecoSAM, said this the lack of transparency was something that his firm along with 21 other investors were engaging with pharmaceutical firms on.

At a breakout session devoted to corporate tax management, Linda-Eling Lee, Global Head of Research at MSCI, said their research revealed an $82bn annual “tax gap“ for companies listed on the MSCI World Index between what they pay now and what they would under a move to country-by-country revenue reporting, equivalent to 20% of earnings. Edward Mason, Head of Responsible Investment at the UK Church Commissioners said companies that don’t recognise that the tax environment has changed are exposing themselves to “significant risk.”