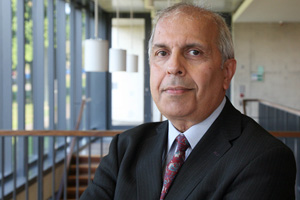 Retiring Professor of Accounting at Essex University, Prem Sikka will have more time on his hands this year to do what he arguably does better than many other scholars: challenge conventional wisdom.

While clearing his desk at the University’s Business School, Sikka tells RI that he will nonetheless keep himself very busy. “We are all little cogs in a big machine, one cog goes out and another one comes in. The machine continues.”

Many in the City and beyond would probably be set to celebrate his retirement — but don’t uncork the champagne yet. This freethinker, co-founder of the Tax Justice Network, is a long-time thorn in the side of the big machine he refers to. It’s very likely he will continue swimming against the stream.

He’s been following the two ongoing separate initiatives on corporate governance (an inquiry run by the UK Parliament’s Business, Energy and Industrial Strategy Committee; and a consultation published by the Government) launched in the last quarter of 2016, in light of huge corporate failures such as those at BHS and Sports Direct.

The governmental one starts with Theresa May proclaiming the UK’s international leadership in corporate governance and a shorter, decaffeinated version of the commitments she made in her bold maiden speech (i.e. workers representation on boards, among others).

It follows a foreword from Greg Clark, Secretary of State for Business, Energy and Industrial Strategy, recalling the reports of Sir Adrian Cadbury and Sir Richard Greenbury published in the 1990s.

About to be asked whether the UK has rested on the laurels of Cadbury and Greenbury, Sikka anticipates the question:

“So, you are not impressed with the Government’s consultation document on corporate governance? It’s really a very poor document with nothing revolutionary so far. The proposals won’t deliver much and seem to be more part of an impression management exercise. But let them have their say, it’s up to us to unpick it.”

The first point that needs to be carefully unpicked is why there are two overlapping initiatives from Parliament and Government, both with similar content (executive remuneration, board composition, etc.).

“It’s obviously an attempt to influence the Parliamentary Committee agenda. This is part of politics since time immemorial, I’m afraid. So as soon as some critical comments emerge [from the Parliamentary Committee], the Government can say that everything is under control and can ask to be left alone.”According to Sikka, UK legislation has got this issue wrong issue for the last 150 years as the emphasis has always been on empowering shareholders rather than stakeholders, the only people, he says, who have economic incentives to invigilate executives.

“Shareholders generally don’t have a long-term interest and they have shown little inclination to shackle executive pay for the last 150 years. I mean, if directors say: ‘I’ll give you untold riches – all you have to do is double my salary’. Why should they be bothered? Shareholders have every reason to go for quick gains. This is also a real cultural problem.”

But Sikka advocates a combination of a stringent legal framework and the idea of long-term stakeholder empowerment.

In such a legal framework, Sikka would exclude several current practices. One is incentives, for example, golden hellos and golden good byes. “They have nothing to do with rewarding performance. The Swiss banned them after a referendum the Minder initiative.”

But in general, incentives need to be rethought, he argues, as they have been responsible for all kind of corporate atrocities, he says. Sikka offers an analogy: “I’m a teacher, should there be an incentive scheme for me if x percent of the students get a first class degree? If they gave me that you can imagine how it would change my behaviour. They would all be getting first class.”

Sikka points to the Parliamentary Commission on Banking Standards report produced in 2013 to make clear his point on incentives. “[The report] said that one major reason for reckless risk taking at banks was that institutional shareholders were exerting pressure on directors to take even more risks.”

In addition, Sikka’s proposed legal framework would not allow executive remuneration in the form of shares, particularly share options, as it complicates the calculation of executive pay and makes it very difficult to know how much executives are really making.

“There are US cases – in the UK, regulators don’t say anything about it – showing that directors have fiddled the date of the options, often backdated them, so that they could get the best price with the benefit of hindsight. I would personally prefer a very straightforward system. If directors want shares they can go and buy their own.”

The idea behind giving them shares and share options as part of executive remuneration is often explained as a way to align the interests of the shareholders and directors.

Sikka dismisses this concept, referring to Sir Phillip Green’s former company left with a £571m pension scheme deficit: “Well, we’ve already seen that at BHS. It was the perfect alignment between the interests of directors and shareholders. They were actually the same people. So you need some kind of independent intervention through the board but that’s exactly what we haven’t really got.”

Another measure in Sikka’s proposed legal framework would limit the voting rights of short-terms shareholders, introducing a qualifying period of 6 to 12 months. Only long-term shareholders, with a long-term interest would be allowed to have a vote.

“Those people who are only in and out like speculators, yes, they can come in and make a quick killing, but they can’t kill the company. They move in, kill a business, strip the assets, get rich, dump the pension scheme deficit and move on. No voting rights for them.”

“So if the Government is really serious about empowering stakeholders, including long-term shareholders, then a qualifying period is needed. There are no such proposals in the consultation. France has a similar kind of law [the so-called Florange law of 2014, which confers more rights to long-term shareholders].”

Sikka suggests that one of the Government consultation paper’s biggest claim is fundamentally wrong: i.e. that shareholders are the owners of the companies.

“Well, that’s simply not true. There is no legal judgment I’ve ever come across which has said the shareholders of a large company are the owners. Shareholders may have voting rights, but that does not make them the owners.”

He explains: “You can go and look the accounts of any of the UK big banks, you will find that of the total capital in the business, shareholders provide around 6 to 8 % of total capital. That doesn’t make them the owners.”He continues: “The company itself is the owner of everything that is in the company. Let’s say I’m a shareholder in Rolls Royce, I can’t just walk into their building and drive away a car saying I’m the owner.

“Successive Companies Acts have codified directors’ duties, but they are not subject to control by any individual shareholder. The body of shareholders is never constant and by law are made to be passive because it’s been realised long ago that they don’t have a long term interest – directors are appointed for that reason.”

The Government’s Green Paper, also refers to the Financial Reporting Council’s Corporate Governance and Stewardship Codes as the key pillars of the UK corporate governance framework.

Sikka, however, calls into question the empowerment that such soft law codes can provide to long-term stakeholders, which he describes as “private gentlemen’s club agreements”.

Sikka notes that if the codes are violated, there is no right to go to a court, seek redress and have their provisions enforced.

“The whole idea is designed to avoid any hard laws and any institutional structure to shackle executives. There is room for these kind of codes, but only if you first have defined clear legal framework parameters [in place]. We don’t.”

When it comes to the content of the codes, Sikka asks where does it say that companies should pay a decent wage, not mis-sell products or pay their taxes? “When they say ‘comply and explain’: Explain what? How many companies have avoided taxes and haven’t explained a thing about it?”

“You can’t empower people with soft words. Putting a tick on a director appointment does not give stakeholders any rights to hold them to account. Neither does requiring directors to tell them anything other than what the ritualistic accounts and accounting standards can say. That’s the problem.”