Responsible Investor
Home Institutions An interview with Axa: ‘If there’s one point I’d like to insist...
Return to search
Institutions 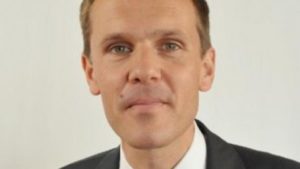 Climate change could cost Axa 0.2% of its investment value.
That’s the conclusion of the insurance giant’s latest report on the topic, released this week, which calculates the ‘cost of climate’ for its portfolio companies as an average of 4.8% of turnover. In other words, 0.2% of its own investment value.

‘It would be helpful to globalise Article 173’ – Axa CIO, Pascal Christory

0.2% of investments is hardly an earth-shattering amount for the €1.4trn French insurer (the calculation is based on its €227bn corporate bonds and equities universe), but it is one of the first – it not the only – instances in which a major asset owner has publically put a concrete number on climate risk in its portfolio.
“Working out the cost of climate took a lot of effort,” says Group Chief Investment Officer Pascal Christory. “Partly because we computed it for our bonds portfolio and our equities portfolio, and each instrument requires its own ad-hoc methodology, even for the same company.”
The methodology is supported by data from Carbon Delta and considers transition risk, physical risk and green revenue streams.
The new report also includes Axa’s exposure to climate risk in its sovereign bond holdings for the first time (done by Beyond Ratings, the French climate specialist recently snapped up by FTSE), and physical risk to its corporate assets. In addition, it tries to define its ‘warming potential’ – the risk its investments pose to the climate, rather than the risk the climate poses to its investments.
This is all part of Axa’s attempt to juggle its obligations under France’s Article 173, which requires mandatory ESG disclosure, and the voluntary framework of the Task Force on Climate-related Financial Disclosures (TCFD).
Christory says Article 173 has been a force for good, pulling numerous teams within Axa together, often for the first time, to gather the necessary information. In future, he says, it would be “helpful to globalise the initiative, or at least introduce a way for all European insurance companies to be conducting the same kind of exercise” – an idea that’s being floated elsewhere in the context of the EU Action Plan on Financing Sustainable Growth.
Nearly 40 pages of Axa’s 2018 financial report, which revealed net outflows of €6bn, was dedicated to sustainability and corporate responsibility, outlining efforts on gender diversity, the SDGs, stewardship and ESG integration.A big part of its efforts lie with a commitment it made in 2017 to allocate €12bn to green assets by 2020, on the back of UN climate negotiator Christiana Figueres’ 2017 call for PRI signatories to put 1% of their assets into green by the end of the decade.
“She displayed a willingness to show asset owners the way when she said that,” says Céline Soubranne, Chief Corporate Responsibility Officer at Axa Group. “So we made the jump. In fact, we doubled her recommendation to 2%.”
It’s a target Soubranne is “confident” Axa will achieve, given that they have already hit around €11bn, with a year to go. It’s a big leap from the €3bn-by-2020 target the group originally set itself, made possible by casting its ‘green’ net wide in terms of asset classes.
“Green bonds are a big focus for investors, but they’re not the only category we invest in for this commitment: we’re also invested in green infrastructure and certified real estate,” points out Soubranne, with infrastructure and impact investing completing the green allocation.

‘If we launch a new green finance target next year we hope transition bonds will exist’ – Head of CSR, Céline Soubranne

The next goal, which Axa will set upon completion of the €12bn, may go wider still. Axa Investment Managers’ Head of ESG Research and Active Ownership, Yo Takatsuki, joined from BMO at the end of last year and has quickly become the face of a controversial new campaign to create another ESG investment product: the transition bond. There is pushback from some investors and industry bodies that think the instrument, which would allow issuers a way of including ‘brown’ assets as long as they ultimately enable a transition to a low-carbon business model, would complicate an already fragmented green bond market. Definitions could prove even more slippery, too, putting the overall credibility of the space at risk. Nonetheless, Axa recently released a set of guidelines to encourage issuers to tap the market.
“We firmly believe in the need for transition bonds,” insists Soubranne, pointing out that pure green investment opportunities are limited and won’t achieve a low-carbon economy by themselves. “Our current €12bn target doesn’t include these kind of assets, but if we launch a new one next year we hope these transition bonds will exist.”

And it’s not just bonds that should give a bigger nod to the climate transition, according to Christory. Axa scores about 95% of its listed assets for ESG performance, and uses those scores to help it select investments.
“But more and more, we’re realising that thinking about absolute ESG scores, especially climate scores, has real limitations as an investor,” he says.

‘We design deadlines at the beginning of the engagement, in cooperation with the company – that’s very important’ – Soubranne

It’s a view that is echoed throughout Axa’s climate report, which claims that investors’ hands are tied by the reality that the real economy is not Paris-aligned. Axa and others are forced to buy into the world’s industries, and if those industries are not 2°C compliant, there is only so much it can do.
“What we don’t want to do is to stop financing corporates that are making lots of effort to finance the transition, just because their absolute score isn’t right,” continues Christory. “We’re the partners of these companies, we’re the ones providing them with the long-term financing to make these transitions, so we’re beginning to think about measuring the marginal improvement of companies as well as looking at their ESG scores.”
On this basis, Christory is relieved that the EU’s current efforts to create a ‘green’ taxonomy – a list of eligible environmentally-aligned business activities – has evolved to include transition.
But there is another element to the EU’s Action Plan on sustainable finance that is more troubling, he says. Last August, the European Commission tasked the European Insurance and Occupational Pensions Authority (EIOPA) with assessing potential changes to Solvency II to incorporate sustainability. More specifically, it wanted to know whether capital requirements for insurers should be made more favourable for green investments.
EIOPA concluded in a document published last month, which followed public consultation, that “views are split” on the topic, but that “generally, stakeholders point out the need for Solvency II, as a prudential framework, to remain risk-based and avoid imposing investment incentives”.
“Only if there is evidence that ESG factors impact the risk profile of an investment, could these elements be reflected in the regulatory framework,” it said.It’s a position Christory is clear should remain. “If there was one point I would like to insist on, not just when it comes to our own scoring, but also when it comes to this kind of regulation, it’s that we shouldn’t obsess about the absolute, we should be financing the transition. And that means we don’t want capital requirements based on ESG scores. That could be a serious drawback because it would force us to cut financing to the corporates that might need our support the most in this process.”
Axa’s own ESG scores help with engagement, he adds, allowing the insurer to show corporates how they perform in comparison to peers. Soubranne continues that “in order for engagement to be effective, we have to define clear targets, and clear expectations on the time limits the company has to meet those targets”.
She describes Climate Action 100+, the investor initiative of which Axa is a member, as a “major step forward” for engagement with companies, and one that’s seen a number of wins so far.
“There are plenty of examples of actions that have gone well on shareholder engagement, but sometimes we don’t obtain any results,” she concedes. “We design the deadlines at the beginning of the engagement, in cooperation with the company – that’s very important. But if we don’t see results within that timeframe then we will decide the most relevant follow up, which may include divestment.”

‘We don’t want capital requirements based on ESG scores’ – Christory

Axa won’t disclose the companies it has divested as a result of unsuccessful engagement, but Soubranne says that as well as climate change, it has axed firms over slow progress on health and broader social issues. On top of that, it excludes €7.15bn of companies who operate within tobacco, coal, oil sands, controversial weapons, palm oil and food commodities.
On the ‘positive’ side, biodiversity is one of the insurer’s new focus areas, and Soubranne says it hopes to “integrate natural capital into our investment decisions more”. As a first step, it launched a €200m impact fund dedicated to climate and biodiversity earlier this year – its third impact fund. Another is being considered, this time on health and social equality, for next year, although that’s not set in stone.

Note: This article was amended to clarify that the Cost of Climate calculation applied to Axa’s corporate bonds and equities portfolios.