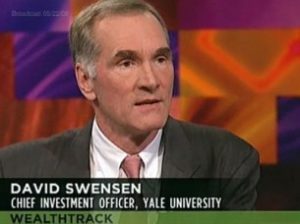 Responsible Investor has got hold of a copy of the letter from David Swensen, the renowned chief investment officer at Yale University, to the asset managers of its $21bn endowment fund – which includes some of the world’s best known alternatives funds – outlining that evaluation of the impact of climate change is now essential when looking at investment opportunities and saying that Yale now expects its managers to engage with companies on the issue. The message from one of the world’s leading investment foundations could be a game changer in prompting fund managers, especially hedge funds and private equity funds, to think about the financial costs of climate change and the potential for serious asset depreciation or stranding as a result of a mooted tighter price on carbon and environmental pollution. In the letter, Swensen says that full accounting of the internal and external costs of greenhouse gas emissions “will call into question the business models of some investments”, and create opportunities for profit. He says: “investments with relatively small greenhouse gas footprints will be advantaged relative to those investments with relatively large greenhouse gas footprints”. He says examples of potential risky business models are thermal coal producers, tar sands operations, companies that rely on cheap power from coal and low lying coastal real estate. Conversely, Swensen says there may be opportunities in companies that produce renewable energy and products that facilitate demand shifting or otherwise promote efficient use of energy. Swensen says Yale’s investment office has concluded that greenhouse gas emissions “pose a grave threat to human existence”, and “create a substantial risk of significant changes to the world’s ecosystem”. Yale now expects asset managers to assess the greenhouse gasfootprint of its prospective investments, the direct costs of the consequences of climate change on expected returns, and the costs of policies aimed at reducing greenhouse gas emissions on expected returns. Swensen, who has run Yale’s endowment since 1985, pioneered the use of alternative assets. Despite a downturn in alternative returns in recent years, Yale has remained a leader in university endowment returns, achieving an average annual return of 11% for the decade ending June 30 2014, according to Cambridge Associates. Swensen says Yale now expects asset mangers to engage with corporates on the financial risks of climate change and the financial implications of government policies to reduce greenhouse gas emissions: “You should encourage managements to mitigate financial risks and to increase financial returns by reducing greenhouse gas emissions,” he says. He continues: “Yale asks you to avoid companies that refuse to acknowledge the social and financial costs of climate change and that fail to take economically sensible steps to reduce greenhouse gas emissions.” Swensen concludes by saying government policies addressing climate change will impose costs on many investments, especially those with relatively high greenhouse gas footprints. He says that accounting for the costs and risks of greenhouse gas emissions means Yale’s investments will be “well positioned to deal with a more enlightened regulatory environment” and lead to better investment decisions and produce higher quality portfolios. The move by Yale comes as new analysis by the UN’s World Meteorological Organisation finds that the level of carbon dioxide in the atmosphere surged at its fastest rate in 30 years last year. CO2 concentrations rose 2.9 parts per million (ppm) between 2012 and 2014, the biggest annual increase since 1984. Last month, The Yale Corporation, the governing board and policy-making body for the university, voted not to divest from fossil fuel companies. Fossil Free Yale has said that its campaign to pressure the university to do so will continue.
See ‘downloads’ (left hand column) to read the Yale letter