Responsible Investor
Home News & Analysis Environmental Engaging on the economic and social damage of the huge growth in...
Return to search
Governance 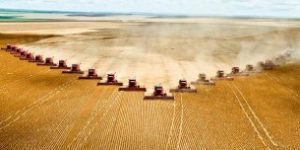 The soy supply chain is a promising but treacherous path for investors to tread. We (RobecoSAM engagement specialists Peter van der Werf and Kanchan Mishra, and senior SI analyst Jürgen Siemer) recently closed a three-year engagement program with companies throughout the soy industry. Companies facing a lot of negative headlines, such as Bunge and McDonald’s, actually turned out to be stepping up their game.
The problem with soy
Soy is mainly used as feed for livestock. With the rise of industrial-scale livestock farming, the use of soy has increased more than that of any other crop. Since 1970, the area of land used to cultivate soy has more than tripled. This exponential growth in soy cultivation has helped feed the world’s growing population and brought many economic benefits to the countries that produce it. Nevertheless, it has come at a huge cost in terms of environmental and social damage.
In the semi-arid sub-tropical regions of Latin America, Africa and Asia, soy cultivation often requires irrigation. In order to recover the necessary investments, a lot of farmers grow genetically modified soybean varieties in monoculture that are resistant to glyphosate, a widely used herbicide. As a result, glyphosate and other chemicals are applied intensively. In developing countries, the production of soy often also comes with dismal labor conditions, child labor, forced labor, violation of land rights, conflicts over water, deforestation, and the list goes on.Direct implications for investors
These environmental and social issues have reputational, operational and legal implications for companies across the soy value chain. Companies that have commercial ties with, say, business partners that violate human rights run the risk of being associated with these unlawful practices themselves. But it doesn’t stop at reputational damage. If violations lead to strikes, occupational accidents or fines, a company will be faced with higher costs as well.
At RobecoSAM, we felt these risks were material enough to investors to start an engagement with eight companies across the supply chain. We talked to seed suppliers, commodity traders, food producers, fast-food restaurants and retailers, including major names such as Monsanto, Carrefour, McDonald’s and Yum! Brands. The engagement had two goals. First of all, we wanted to improve the sustainability of the companies and therefore the risk-return profile of their stocks and bonds. Another important objective was to share our newly acquired knowledge with our colleagues in portfolio management, as input for their investment decisions.
Four paths of improvement
At the start, we defined four objectives we wanted to achieve. To start with, we wanted companies to assess the environmental and social risks they were facing. Initial research revealed that companies generally provided limited evidence of doing so.

After three years of engagement, almost all of the companies had developed a comprehensive policy to better assess risk in their soy supply chain.
The second objective was for companies to manage these risks. We expect the companies in our portfolio to implement environmental or social requirements for their suppliers. The companies’ risk management systems varied a lot. At the end of our engagement, we were quite satisfied with the systems of Associated British Foods and Bunge. Bunge, for example, implemented sourcing screens in its Brazilian business and we value its commitment to eliminate deforestation from its agricultural supply chains. McDonald’s, on the other hand, is still only taking the first steps to develop a comprehensive risk management approach.
Once companies had identified and managed risks, they were encouraged to be more transparent about it. Ways to do this are committing to external reporting initiatives, or structured reporting on their corporate website. Syngenta and Carrefour were the only companies that were transparent enough at the start of our program. Later on we saw considerable improvement, especially on corporate websites. McDonald’s, for example, has launched a website on which consumers can ask about the origins of the raw materials the company uses in its products. For Noble Group, the evidence released in the IFC’s Environmental and Social Impact Assessment on the Noble Agri spin-out wassufficient to close the objective Transparency & Disclosure successfully.
The fourth path of improvement was for companies to collaborate and build partnerships across the sector. Here the companies weren’t doing so bad anyway. Six of the eight companies were already involved in the Round Table on Responsible Soy at the start. During our engagement we talked to AB Agri, a division of ABF involved in sourcing soy for animal feed in Europe. We discussed how the company could use its leadership in the European industry association to develop guidelines for sustainable soy sourcing.
Good progress: 87% closed successfully
We were quite satisfied with the progress we observed. Overall we closed 87% of our dialogues successfully in this engagement program. The majority of the companies in our engagement peer group perform a risk assessment to help them adopt better policies, make substantial improvements to their risk management approach, increase transparency and actively engage in partnerships and collaborations within the sector.