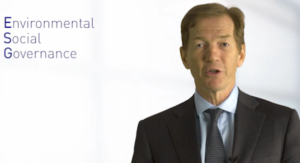 It will be moving in this direction soon, releasing a paper in the coming weeks on the current disclosure practices on climate change of the agriculture and forestry sectors.

The work is connected to its parent State Street’s support of the Bloomberg/Carney Taskforce on Climate-related Financial Disclosures (TCFD).

But it is also part of SSGA’s growing focus on stewardship as part of the investment process. Rick Lacaille, global chief investment officer and Rahki Kumar, head of ESG investments and asset stewardship, call it a move from “being reactive to having an impact”.

Kumar says a significant change happened when responsibility for governance, stewardship and ESG investment moved under Lacaille in 2012, “highlighting how important it is to the investment process at State Street,” she says.

Lacaille chairs SSGA’s investment committee that oversees its proxy voting guidelines and meets with the stewardship team twice a year to discuss governance issues. The vast majority of SSGA’s asset management is through large indexed funds, meaning it can’t sell out of companies and takes a long-term view on holdings.

SSGA’s stewardship approach is to look at sectors in its indices over a four-year period to cover its entire portfolio. Its global approach gives its analysts the ability to “connect the dots”. For example in a recent grocery chain study, seeing an activity that failed for UK chains taking up subsequently by US chains allowed for a deep dive conversation with the US stores.

Alongside this, SSGA’s stewardship team looks at themes, like climate change, that go across sectors. It will “retire” a thematic issue when it has made its way into mainstream thinking, which for SSGA demonstrates the impact of its work. This has been the case for the issue of board refreshment and composition.

Lacaille says this process works well: “With the board refreshment process we looked at practices in different countries. There was surprise when we wrote to US companies and said ‘you may have directors who might not be independent, as they have been with you for a long time’. But if you were looking at other countries it wouldn’t be surprising at all.

“I’m not saying that the world needs to be harmonious entirely,” he says. “But I do think that the global outlook across countries is quite valuable, especially in rebutting arguments you might get from a company or board.”

In the US, there has been some push back to shareholder engagement, perceived in some quarters as the “politicization” of the investment system. Kumar says SSGA avoids this by focusing on the business case for its engagements and having a two-way conversation with companies. “It’s not about values but value for us. That means we study the issue to show how it is impacting our portfolio.”

This is the case for SSGA’s famous ‘Fearless Girl’ initiative to encourage companies to put more women on boards. The public-facing campaign of a bronze statue of a young ponytailed girl installed in the heart of New York’s financial district became a social media hit and a powerful symbol of gender equality. But internally for SSGA the focus was mainly on financial performance.“It was research, not new or original by State Street, that found cognitive diversity leads to better decision making in a group setting and typically may lower risk,” says Lacaille. “The additional part was looking specifically at gender and saying ‘when you have more diverse boards and senior management, the evidence is clear that there is correlation between performance and diversity’. That in itself immediately takes this out of a values regime to value.”

He continues: “In its own right it is a completely respectable position to take that we should be going for diversity. But the financial link enables us to have a dialogue in terms that are more broadly accepted from a fiduciary perspective. So we took a decision, did the research, and changed our proxy voting policy as a result.”

“That is the essence of our approach. We find some evidence, digest it, develop a policy and then go to companies and discuss it with them. [It’s a question of] how they measure up against the policy and what we can do about it.”

“We took a decision, did the research, and changed our proxy voting policy as a result.”

Taking such a public position on an issue attracts attention, positive and negative. After the unveiling of Fearless Girl the media scrutinised State Street, reporting for example on US regulatory fines it faced for paying female executives less than male colleagues.

State Street employees also asked more questions about how the organization has fared on gender diversity. One-third of State Street’s board is comprised of women, 13% of its vice-presidents and managing directors and 28% of senior vice presidents are female.

“It’s risky. You could be accused of hypocrisy. People find something. But it is better than doing nothing. Staff asked questions, but equally they felt proud that we were doing something. Even if it was risky,” says Lacaille.

He says the campaign has had the impact it wanted. “Spencer Stuart data the other day found 40% of all board appointments in the US were women last year. Many more women are being appointed which we believe will lead to better performance which was the original and remaining objective.”

The ability to have such impact means SSGA feels it should recognise its part in affecting the wider investment market.

Its Annual Stewardship Report 2017 says its role includes “promoting investor protection for minority shareholders in global partnerships with local investors and regulators, and working with investee companies to encourage ESG adoption and disclosure”.

“There are many reasons for that,” says Kumar. “We are a global investor with a large AUM ($2.7trn in 2017) and we feel that responsibility. It gives us certain access to management. And we are aligning with our clients. We know we are representing the majority of the population.”

Connected to its philosophy on wider investment stewardship, SSGA co-launched the Investor Stewardship Group (ISG) in early 2017. It is the first set of stewardship and corporate governance principles for the US market, designed by a coalition of global asset managers and asset owners.

It launched with 17 members and now has grown to 58 international institutional investors who collectively invest over $22trn in the US equity markets. Kumar says it is moving into its next phase now of becoming more visible among corporations but admits “it will be tough” as it “brings in the comply or explain regime which isn’t common in the US”.

Investor members are thinking of how to report on the ISG Stewardship Compliance Statement that is similar to the UK Stewardship Code. The University of Delaware is the ISG secretariat.

For its smaller active business, SSGA works with clients on integrating ESG. Lacaille says: “It’s worked its way into equities. With the fixed income market it can be a little bit challenging due to a lack of data. But I think we are probably 90% of the way there.”

In recent months, there has been more focus on the reliability and consistency of ESG data. Significantly, eight of the major providers of ESG data are working together to better harmonise their standards and framework.The issue has been on Lacaille’s mind for years. In 2014 he sponsored Project Delphi, a major multi-stakeholder initiative to help define the links between ESG and financial performance. A framework was developed, said Lacaille, but not taken further externally as the Sustainability Accounting Standards Board (SASB) became an emerging industry standard.

Since then, SSGA has built a data architecture aligned to SASB standards and incorporating its stewardship insights.

The rise of interest in ESG investing is well documented. But, some question whether another financial downturn could dampen interest. Lacaille, who maintains close links to the highest levels of finance, meeting for example European Central Bank Governor Mario Draghi on a regular basis, believes it is here to stay.

“We’ve talked to them and they are expecting their managers to step up to a level we are already at frankly. It’s good that we were well prepared. It is an example of the very largest investors in the world raising the bar for everybody because they are going to ask all of their service providers to get to that level.”