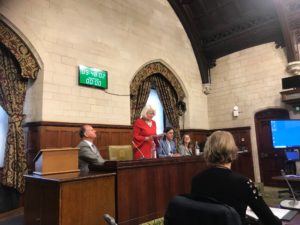 In the last five years since the say-on-pay regulations entered into force, dissent from shareholders of UK listed companies on remuneration packages has been the exception, research by the High Pay Centre and the Chartered Institute of Personnel and Development (CIPD) has showed.

Hosted by opposition Labour MP Siobhain McDonagh at the House of Commons yesterday, the two bodies presented the findings of their report Executive pay in the FTSE 100. Is everyone getting a fair slice of the cake?

Ashley Walsh, Head of Policy and Research at the High Pay Centre, said that despite the shareholder springs of 2012 and 2016, dissent has only been exercised in small numbers at the most extreme cases.

High Pay Centre analysis showed that low levels of shareholder opposition to pay packages has been routine since 2014 when shareholders were granted a say-on-pay vote in the UK.The say-on-pay system introduced a binding vote on remuneration policy every three years and an advisory vote on the remuneration report every year.

This year, no single remuneration report was defeated and the mean level of dissent (including abstentions) was 7%, with remuneration packages achieving more than 90% of shareholder support.

When the last five years are considered, analysis showed that just six resolutions were defeated and the average level of dissent was 8.8%.

Walsh said, being optimistic, this could suggest that shareholders consider they can support the policy and then vote on its consequences when it comes to report stage.

The less optimist view is that “shareholders might not understand the complexity of the pay policy they voted for and then when it comes to report stage, they don’t realize the consequences of the policy upfront,” Walsh said.

Janet Williamson, Senior Policy Officer for Corporate Governance and Capital Markets at union umbrella body the TUC was part of the panel presenting the report. She questioned the effectiveness of shareholder oversight, advocating instead for a stronger involvement of the workforce on executive remuneration.