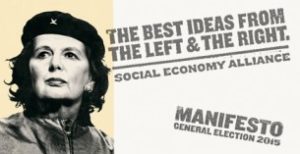 The Social Investment Forum, a coalition of UK social investors, including Big Society Capital, Bridges Ventures and Social Finance, has called for a French-style ‘solidarity fund’ rule where pension fund managers would be obliged to offer all savers the option of investing in businesses which benefit society. The call forms part of a campaign launched by the Social Economy Alliance, a group of 400 organisations, including social investors, social enterprises and charities. Its main suggestion is that UK politicians should ditch traditional left-right notions of ‘businesses against society’ or ‘markets against state provision’ when thinking about the long-term economy. Celia Richardson, Director of the Social Economy Alliance, said: “Across the globe the race is on to build socially-productive businesses and democratise markets. The UK is ahead in many ways, but our old-fashioned left-right notions often mean our economic policies get in the way, where state ‘vs’ market thinking makes it tougher for social economy alternatives to thrive. This is storing up problems for generations to come. Our message to the parties ahead of the election is that they must avoid deadlock by using the best ideas – often a smart combination of ‘left and right’. Business can be a vehicle for social change, and markets can be used for society’s benefit. Our political leaders need to get behind the sort of economy that voters are already building.”
The campaign includes a new advertising campaign that combines the famous faces from the left and right of politics such as Margaret Thatcher and Che Guevara (see picture).It also supports the launch of the Social Economy’s Alliance 2015 election manifesto which carries 25 recommendations to build a pro-social economy in the UK.
Dan Gregory, acting head of policy at Social Enterprise UK, which is part of the Social Economy Alliance, told RI that the benefit of the pensions solidarity fund recommendation was that it would not be too difficult for a government to implement: “A government is wary of spending money, taxing the public or bringing in more regulation. This recommendation is only making the option mandatory. It is not forcing anyone to do anything but just forcing them to confront the option, which they can reject.”
In France, pension providers for French employee savings schemes must offer the option of at least one solidarity fund or ‘fonds solidaires’, which provides a mix of socially responsible and high impact social investments. The rule was introduced in 2010 and in the last four years assets in the solidarity funds have quadrupled to reach almost €3bn invested by almost one million French savers. The funds, which are offered via company savings plans (Plans d’épargne-d’entreprise: PEE) or collective savings plans (Plan d’épargne pour la retraite collectif (Perco), are known as “90/10” funds, with 5-10 % of the assets being diverted towards social finance projects for the long-term unemployed, housing and environmental or societal solidarity projects.