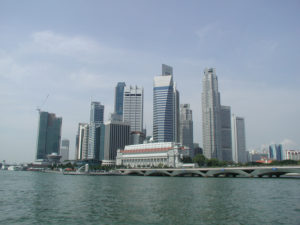 Singapore's state-owned investment company Temasek Holdings aims to halve the carbon emissions of its investments by 2030, and has committed to studying how it can achieve a carbon neutral portfolio “sooner rather than later”.

In a speech at the Global Compact Network Singapore Summit, Temasek CEO Ho Ching said that the S$313bn (€208bn) fund will also aim to make its operations carbon neutral by next year. Pursuant to this, Temasek will begin reporting its water, paper, energy usage and air travel this financial year.

This decision was taken after “a pretty hard debate, quite emotional” among the fund’s leadership said Ho Ching – who is the wife of Prime Minister Lee Hsien Loong.

Temasek – which invests in plant based proteins, fertilisers and other climate solutions according to the speech – is one of the few institutional investors who have publicly declined a share in Saudi Aramco’s planned upcoming IPO according to a recent Bloomberg report.

Temasek recently closed its inaugural impact-focused fund, ABC World Asia, at S$385m. The new private equity strategy was set up in May this year by Temasek Trust, its philanthropic arm.

Temasek’s announcement follows a commitment made yesterday by the city-state’s central bank to invest $100m in the recently launched green bond fund structure created by the Bank for International Settlements (BIS), the Switzerland-based central banking organisation.

The investment is the first allocation as part of a $2bn green investment programme announced yesterday by the Monetary Authority of Singapore (MAS), which is the financial regulator.BIS’s asset management arm launched the Green Bond Investment Pool, a green bond investment vehicle for its central bank customer base, in the summer.

The Reserve Bank of New Zealand has already invested $100m in the fund, its Governor Adrian Orr revealed in a recent op-ed.

The green finance programme was announced in a speech by Singapore’s Minister for Education and MAS board member, Ong Ye Kung, who was speaking at a fin-tech conference.

In the speech, he said that MAS is “intensifying” its supervisory focus on how banks, insurers and asset managers are assessing climate risks.

Kung warned financial institutions that they “should” make early strategic shifts in capital allocation from brown to green businesses, “or risk being stuck with environmentally unfriendly stranded assets”.

He also revealed that MAS will develop incentives to “encourage growth in green and sustainability-linked loans”, including creating grants schemes to help businesses off-set the associated costs.

The aim of MAS’s new green finance programme is “to foster the growth of a strong and diverse ecosystem of green financing capabilities in Singapore”.

MAS stated that it will place funds with asset managers “committed to drive regional green efforts out of Singapore and contribute to MAS’ other green finance initiatives including developing green markets and managing environmental risks”.

Singapore has 24 signatories the Principles for Responsible Investment (PRI), though none of them are asset owners.

Note: This article was amended to clarify that Tamasek is a state-owned investment company, not a sovereign wealth fund.