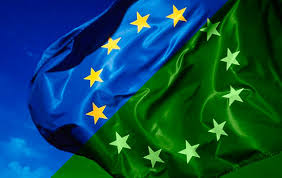 The European Commission has confirmed its first four legislative proposals to spur sustainable finance in the region, covering benchmarks, green definitions, investor duties and retail investing.
Telling a press conference, “the Titanic couldn’t turn to avoid the iceberg at the last minute”, Commission Vice President Valdis Dombrovskis said that conversely the Commission would move quickly on implementing financial measures to tackle climate change, completing as much as possible within the current political cycle in order to avoid disaster.

Creating an environmental and social checklist

Firstly, the Commission will decide “what is green and what is not”. A taxonomy, which will act as a classification system, will become a formal process with a governance structure rooted in the new legislation. Members of the working group are still to be announced, Dombrovskis said, but the taxonomy will have six official objectives. They include defining eligible categories for climate mitigation, adaptation, water and marine resources, waste and recycling, protecting ecosystems and promoting the circular economy.

The classification system, he said, will reduce greenwashing and tackle current fragmentation by “laying the ground for a single market for sustainable investment”. It will be science-based, he added.

Fellow EC Vice President, Jyrki Katainen, said that greenwashing was not always intentional, but added that “we don’t have a well-functioning regulatory environmental” to allow investors to allocate capital to credible sustainable products and projects. As a result, he said some providers were using “not-that-scientific measures” to “colour” products green.

When asked how consensus could be reached on particularly complicated topics such as climate mitigation, Katainen pointed to existed ‘ecolabels’ and climate-friendly certifications in Europe, saying their introduction would be difficult, but doable, noting: “it’s supposed not to be rocket science”.

The green taxonomy is expected by the second quarter of 2019 and will be implemented six months later. A taxonomy will then be created for social topics.

Forcing investors to disclose on ESG

The second proposal by the Commission was, as expected, on fiduciary duty. Asset managers, insurers, pensions and other investors that run money on behalf of other people will be asked to make sustainability a part of their considerations. Rules will be changed to force investors to disclose how they do this, while those with products specifically sold on the basis of sustainability will be required to “demonstrate how they do so” in more detail.h6. Channelling retail investment into sustainability products

To complement this, the Commission is also pushing ahead with its plans to update suitability tests for individual savers and investors. Banks and asset managers dealing with retail clients will need to ask them about their non-financial values and offer products that meet those investment objectives.

One of the biggest projects being undertaken by the EU on sustainable finance is around benchmarks. The topic has quietly risen up the agenda, and the Commission has confirmed that it will use a Delegated Act to create a new category of benchmark, covering two approaches, both focused on climate mitigation.

The first will be a conventional low-carbon benchmark, which will serve to “decarbonise standard benchmarks” by selecting stocks with lower emissions. “It’s for the market to decide the level of low carbon [and] what kind of scenario they are targeting,” explained Dombrovskis.

For those investors that want to be 2°C compliant, the second benchmark – which Dombrovskis described as “impact” focused – will be more ambitious: “It needs to meet the Paris scenario”, he said, adding that this is achieved when the carbon savings of a company outstrip its carbon emissions.

Just like the taxonomy, the benchmarks will be updated regularly.

Existing low-carbon benchmark providers will also be asked to disclose their methodologies.

Katainen highlighted estimates that the EU will need an additional €80bn annually to be invested in climate-aligned goals in order to meet its goals under the Paris Agreement. It’s crucial to scale up private finance’s role in this, he said, adding: “Sustainable finance cannot be seen as a marginal activity for some kind of extremist group that doesn’t understand market economics”.