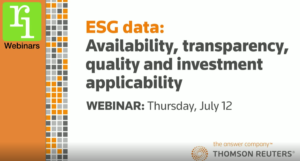 State Street Global Advisors (SSGA), the world’s third largest asset manager with $2.7trn in assets under management, of which $200bn are in ESG assets, is exploring the use of multiple ESG data providers, due to concerns about the risk for investors that might emerge from diverging approaches to materiality.

Speaking at a webinar organised by Responsible Investor and Thomson Reuters, Rakhi Kumar, Senior Managing Director and Head of ESG Investments and Asset Stewardship at SSGA, said: “Each data provider has its own proprietary materiality framework and this tends often to be a black box for investors.”

Kumar said that each data provider has its internal methodologies for defining and normalising materiality across companies, and for aggregating and weighting various ESG factors.

In the absence of required ESG standards of reporting, Kumar added, each data provider relies both on what companies have voluntarily reported and on statistical models that estimates data when companies do not report it.

“In short, the lack of standardisation poses a real challenge for investment managers. In its absence, we have to do our due diligence on data.”

She added that it is the providers’ ESG philosophy and view of the world that defines how they collect data and interpret it to produce a score.

If you think about it there is one dominant data provider, she said, with a lot of money being managed against its indexes, whose beliefs and philosophy are “driving what all of us believe”.

She also said that as an asset manager concerned about its fiduciary responsibilities, State Street is “exploring the use of multiple data providers to address some of these concerns that I highlighted.”

Kumar’s concerns reflect the findings of an academic paper published by the Journal of Investment Management, entitled A Blue Print for Integrating ESG into Equity Portfolios Bersagel, Senior Analyst at Folketrygdfondet (Norway’s $29bn national Government Pension Fund), was also a speaker on the webinar.

She warned about a gap in the ESG data space, particularly worrying for an investor which is a “big fish in a small pond” and whose “competitive advantage is deep knowledge of our companies”.

Bersagel said: “We definitely observe a gap between the financial analysts on the one hand, who know the companies and the industries well but often with limited understanding of ESG. And on the other, the ESG service providers who are often perhaps too far removed from the company and don’t seem to really understand the business model or the ownership structure.”

A poll among the audience of the webinar, with over a thousand participants, revealed that 70% of them want ESG data reporting to be compulsory.

Elena Philipova, Head of ESG Proposition at Thomson Reuters, said that regulation can move the needle and applauded the leadership of the European Commission, which is preparing legislation in that regard, part of the ongoing Action Plan on Financing Sustainable Growth (link).

“I do believe in the potential there for the public sector, that actually provides the framework for the private sector to comply with. We’ve seen for a very long time so many initiatives from the private sector emerging, picking up great momentum and slowly dying,” she said.

Shivani Rajpal, Director, Services at the Global Reporting Initiative (GRI), was asked by the audience whether the GRI and the US-based Sustainability Accounting Standards Board (SASB) are competitors in this space. She said she sees both organisations as “complementary”.

Regarding the compulsory versus voluntary approach of ESG data, she said that GRI standards are referenced in 125 policies across 60 countries. She added that a degree of flexibility would still be advised: “It is important to have some sort of ESG data as compulsory but it should not be just for the sake of reporting, it should be what companies need to report on.”