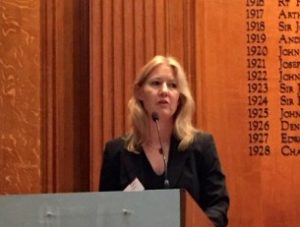 The UK Government must announce its fifth carbon budget – a legal cap on UK carbon emissions for the period from 2028 to 2032 – by the end of June 2016.

Most observers expect ministers to do this just after the UK’s referendum on EU membership. Back in 2008 the UK Parliament passed the Climate Change Act with a resounding, cross-party majority, setting a clear goal to shave 80% off greenhouse gas emissions by 2050 compared to 1990.

Under this legislation an independent scientific Committee on Climate Change (CCC) is tasked to propose five-yearly carbon budgets that plot a route to the 2050 target and to advise ministers on the most cost-effective path to reach the goal.
Last November the CCC recommended a 57% reduction in emissions for 2028-2032. Now, however, this central element of the UK’s decarbonisation agenda is under threat because of political divisions within Whitehall – the government administration – and in Parliament over whether to accept that advice.
Institutional Investors Group on Climate Change members – 122 institutional investors from across nine European countries with over £13trn (€16.6trn) of assets under management – regard the UK’s Climate Change Act to be a model example for how governments can enable a smooth and cost-effective transition to the low-carbon, clean energy economy mandated by the Paris Climate Agreement.

It reflects the bald reality that gradual, smooth transition is more affordable than a late or abrupt policy change and provides the right kind of forward visibility about government intentions that investors and companies active in the energy space need in order to plan significant long term investments in accordance with carbon constraints.
With that in mind, a month ago the IIGCC wrote to Prime Minister David Cameron urging his Government to respect and endorse the scientific advice given by the independent Committee on Climate Change, bringing forward a 5th Carbon Budget for Parliament to approve unchanged and without caveats.

Central to meeting the goals of the Paris Agreement is the notion that companies and investors must avoid generating the kind and scale of stranded assets that will result from a delayed, abrupt or drastic transition. Making gradual progress towards a final objective of climate neutrality, we stand a much better chance of ensuring this transition occurs at the lowest possible cost and the greatest overall benefit to both investors and communities facing the impact of climate change.

Demonstrating unequivocal commitment to this central aspect of the Paris Agreement should not now be up for debate within the UK.Much hot air has been expended in recent months by opponents of the CCC keen to persuade Energy and Treasury ministers a carbon budget damages competitiveness.

However, as the London School of Economics’ Grantham Institute research shows, existing policies to curb carbon emissions have neither damaged UK businesses nor driven carbon intensive industries to relocate to countries with less stringent climate change legislation.
Moreover, the same research shows clear economic benefits for countries that take strong climate action, suggesting the UK is well placed to take advantage of the global low-carbon transition. Yet investors have learned to their cost over the past year that UK energy policy can change far too rapidly, particularly with regard to support for onshore wind power developments.

It’s no great surprise that other research by the Energy and Climate Intelligence Unit (ECIU) found the UK significantly behind other EU competitors in the low carbon business, ranking only sixth among 28 member states, far behind the leaders Sweden.
In fact, by stimulating investment into new low-carbon technologies now, UK ministers can take advantage of historically low financing costs, address the need to bring capital into the real economy and create perpetuity of investment and technology benefits sufficient to power the economy sustainably for decades.
If the Government wants to secure long term investment in the UK’s decarbonisation strategy it must adopt the ambitious 5th carbon budget being advised by independent scientists on the CCC and bring forward the policy initiatives required to live within it.

Moreover, for the Climate Change Act to remain credible, and for the risk premium required by investors to stay as low as possible, the process by which the UK Carbon Budget is set must remain independent.
The timing and impact of this decision will be significant. With less than five months to go to the next round of climate talks (COP22) in Marrakech, the United Nations Framework Convention on Climate Change has already called on governments to set out their 2050 plans to phase out coal, oil and gas.

The UK Government should now give the kind of long-term signals required to ensure a cost-effective low carbon transition all the way to 2050 by announcing a robust 5th carbon budget that endorses and respects the advice of the CCC without caveats or changes. Likewise, institutional investors urge Parliament to enact this promptly.

Stephanie Pfeifer is CEO of the Institutional Investors Group on Climate Change.