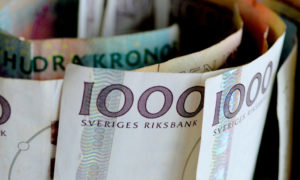 Sweden’s Financial Supervisory Authority, Finansinspektionen, has opened an investigation into whether companies should report the carbon price they use for internal modelling and investment decision-making.

The body, which regulates financial services in the country and is overseen by the Ministry of Finance, “will investigate the possibility of promoting, at both national and international level, that companies increasingly report an internal price for carbon dioxide emissions”, it said in a statement last week.

It also told RI that it is “looking at” the use of climate scenario analysis and stress testing, describing the tools as an “important part of the international work on sustainable finance that we are engaged in.”

FI has been relatively quiet on sustainable finance so far, despite Sweden more generally leading the world on the topic. The Swedish central bank recently made history by divesting sub-sovereign bonds from issuers in Canada and Australia owing to perceived climate risk. Sweden’s public pension buffer funds, known as the AP funds, are among the most ambitious globally when it comes to environmental and social impact; and Magnus Billing, the CEO of Alecta – Sweden’s biggest pension fund – was one of the advisors to the European Commission on its ground-breaking Action Plan on Sustainable Finance.

However, the FI has made its position clear in a recent statement and report on carbon pricing, saying that “sustainability-related information can contribute to the stability of the financial system, good consumer protection and well-functioning markets”.

“Access to relevant information is a prerequisite for the financial system to contribute to sustainable development,” it added.

“The fact that companies report internal prices for carbon dioxide emissions can help investors, for example, identify the degree to which a company is exposed to transition risks and can act as a driving force for sustainable development in the business sector,” the statement continued, pointing to one approach that it is currently discussing in which companies report the internal carbon price they use when they calculate the value of new investments.

“If the price is low, it sends a signal that the company does not fully take into account the socio-economic costs of emissions and that its business model may be vulnerable to future climate risks,” it explained.

FI told RI it was “too soon” to say whether they would regulate companies on the topic. The next step will be for the FI to host a round table for banks, insurers, asset managers and others to discuss “the importance of internal carbon prices for carbon dioxide emissions in their investment decisions and risk management, and how FI and the industry can get more companies, both non-financial and financial, to report it”.

In a report also published in Swedish alongside the announcement, the FI pointed to the existing work of the Task Force on Climate-related Financial Disclosures, the UN, the European Commission and the CDP. It highlighted another report published last year by Swedish pension fund AP7 and the International Chamber of Commerce for Sweden, calling for all companies to have an internal carbon price, as well as name-checking work from Schroders.