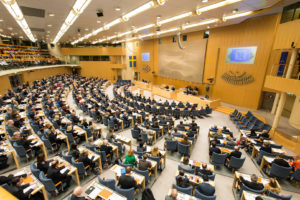 Sweden’s parliament yesterday approved major reforms to its government-backed pension system, in a move that will see the four main AP funds required to become ‘exemplary’ in the field of sustainable investment.

Despite the current political uncertainty in Sweden, following a complex election result in September which has left the country temporarily without a new government, the Parliament moved ahead with the long-awaited changes this week.

The first part of the new rules sees the funds legally required to be “exemplary” (an approximate English translation) when it comes to ESG, but there is no explicit definition of what this means – the AP funds are already regarded as global leaders on sustainability – so a working group has been set up to decide.

RI understands the group comprises mainly of members of the existing Council on Ethics, which guides the funds on responsible investment issues, and the four fund CEOs. It has spent the year trying to develop a shared set of expectations on sustainability, which will be published early next year and implemented during 2019.

As part of this process, RI understands that a joint exclusion list will probably be devised – a potentially controversial move, as some of the AP have traditionally relied more heavily on exclusions, while others have shunned the approach in favour of engagement with companies.
A standardised approach to measuring and reporting on ESG topics is also under discussion, and – if adopted – would enable the AP funds to be more easily compared and share information.The funds have already made a number of innovative moves in recent months when it comes to sustainable investing. Yesterday, RI reported that AP1 was re-tendering most of its emerging market equities portfolio, with ESG as a central part of its RFP.

On an RI webinar on corporate bonds earlier this month, AP2 revealed its plans to launch a new ESG-tilted benchmark for the asset class early next year, having already introduced the model to its active portfolio in recent months. In June, AP4 announced it had exited 20 coal companies for climate change reasons.

In addition to codifying the sustainability obligations of the buffer funds, the new law will redefine their asset allocation criteria, which could also have implications for how they can support ESG-focused and long-term investments.

For example, the funds will be permitted to increase their risk appetite. Revisions to their investment-grade corporate bond targets will mean they have to invest at least 20% of their assets, as opposed to the original requirement of 30%. Most dramatically, perhaps, are the changes to their illiquid asset limits. Previously, the funds could invest as much as they wanted in real estate, but had a 5% cap on other real assets, including private equity and infrastructure. Now, the cap will swell to 40%, but will include their real estate allocation within it.

Some of the AP funds are expected to seize on these new opportunities earlier than others. AP4, for example, created a Head of Alternatives position this summer in preparation for the changes.

Further changes to asset allocation rules are slated to be discussed by Parliament in the spring, with a view to introducing Stage 2 of the reforms on July 1.