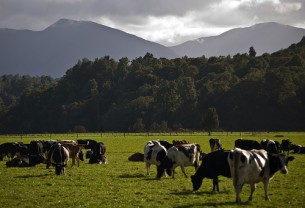 Investor demand for farmland has increased over the last few years, as pension funds and other institutions seek alternatives to volatile stocks and low-yielding bonds. The trend has raised fears among NGOs about environmental degradation and a land grab in the developing world that could lead to higher food prices and a worsening of world hunger.

To allay those fears, some of the world’s biggest pension funds – ATP, ABP, AP2 and TIAA–CREF – teamed up in September 2011 to launch the “Principles for Responsible Investment in Farmland” (Farmland Principles).

EBG aims to complement the principles by acting as a “trusted go-to destination for information on responsible private farmland investing, including environmental and social impacts.”

EBG said the hub would benefit investors by enabling them to assess potential and existing performance and benchmark that performance against peers. It added that governments could also make use of the hub in deciding which farmland investments to allow, while NGOs could use it to better understand advocacy needs. In terms of the mechanics, EBG will collect and, for a fee, distribute the information on farmlandinvesting. It is to be advised by a new board whose four to five members are currently being sought.

EBG says the board will be “established and publicized” by the end of March and that the deadline for the first round of reporting will be May 2013 – with results published by the start of June.

EBG managing partner Bernd Schanzenbächer said that while his firm was providing the know-how, manpower and funding to get the project started, “the idea is to have it operate independently of EBG Capital in the long run.”

EBG’s other managing partner is Ralph Kretschmer, who, along with Schanzenbächer, formerly headed the Environmental Business Group at Credit Suisse. EBG’s chairman is Ulrich Niederer who served in the same role at UBS Switzerland between 2001 and 2009.

Asked why as an advocate of responsible investing, EBG Capital hadn’t yet signed on to the UN-backed Principles for Responsible Investment, Schanzenbächer said: “If a client of ours would require this, we would have no problem signing. But our clients judge us according to the extent to which we invest sustainably. Our commitment to sustainability is underlined by what we do and not by any intentions to do so.”

Beyond farmland, the Zurich-based investment boutique specialises in renewable technology and timber, though it doesn’t disclose its assets under management. Link