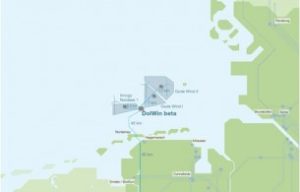 Talanx has become the first big German insurer to invest in one of the country’s emerging offshore wind parks, providing €320m in finance for the acquisition of a 50% stake in Gode Wind 1, a facility located in the North Sea that is being developed by Danish energy firm DONG.
Talanx is not investing directly in the 330MW park, but instead has arranged €556m in debt finance from institutional investors, including its own contribution of €320m. The bond bought by Talanx and the other investors – including smaller German insurers – was issued by Global Infrastructure Partners (GIP), a New York-based infrastructure investment firm.
GIP will use the proceeds from the bond sale to acquire a 50% stake in Gode Wind 1. The total purchase price for the stake is €780m. Three years earlier, DONG paid €157m to acquire the rights to develop Gode Wind 1, 2 and 3, which are located 30km northwest of the German island of Nordeney.
“Gode Wind 1 is an ideal investment for our house,” said Thomas Mann, Chief Investment Officer of Talanx Asset Management, adding that the deal demonstrated Talanx’s ability to arrange such large-scale transactions. The insurer expects a return of between 3 and 4% annually from the wind park after it goes on stream at the end of 2016.Hanover-based Talanx is the first of Germany’s big insurers – among them Allianz and the Munich Re group – to finance one of the country’s offshore wind parks in a big way. Twelve of the facilities have been completed so far and seven, including Gode 1, are currently under construction.
Indeed, offshore wind power is key to Germany’s so-called Energiewende – or the transition to renewable power from fossil fuels and nuclear. By 2050, the government aims to have 80% of the nation’s energy supply come from renewables – though this depends on installing 10GW of offshore wind capacity.
While Allianz, Germany’s biggest insurer in terms of sales, has invested around €2.5bn in renewable projects around Europe, including 54 wind parks and seven solar ones, all of the former are onshore. One reason why Allianz has been reluctant to invest in offshore wind is that the technology does not yet have a long track record. Munich Re has also cited this fact to explain its reticence.
Meanwhile, Talanx, which trades on Germany’s MDax midcap stock index, says it will invest up to €1.7bn to renewable projects, including offshore wind, over the next two years. Including Gode Wind 1, it has already allocated more than €900m to the sector.