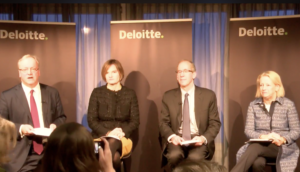 The uptake of the Task Force on Climate-related Financial Disclosures (TCFD), the Mark Carney/Michael Bloomberg-backed framework, is slower than it should be, according to former Securities and Exchange Committee Chair Mary Schapiro, who has a key role in the initiative.

She said that while the TCFD framework had been “endorsed” (she said this in inverted commas, or ‘air quotes’) by over 550 companies and investors, “the uptake in terms of actually reporting financial results using the governance, risk management, business strategy and metrics pillars of the TCFD framework has been slower than it should be”.

Schapiro is Bloomberg Public Policy Vice Chair and has a key role in the TCFD Secretariat as well as being Vice Chair at the Sustainability Accounting Standards Board (SASB). She was speaking at an event hosted by Deloitte at the World Economic Forum in Davos.

She also suggested regulators were “losing patience” with companies not using the various voluntary ESG disclosure frameworks and that there may come a time when they decide to “step in” to decree disclosure.

She said: “I think regulators can step in and are, perhaps, losing patience with the voluntary initiatives that we’ve seen engaged in.

“SASB is a voluntary initiative that has created phenomenal tools for companies to use. But unless institutional investors are demanding the information from public companies the uptake is going to be slow.”“A regulator can certainly step in and decree the use of SASB, the use of the TCFD or a number of others.”

But Schapiro, who as long ago as 2010 oversaw the launch of climate reporting guidance at the SEC, said this “shouldn’t be necessary”.

All regulators had the obligation to ensure that markets are transparent, fair “and that they’re minimising systemic risks – and climate change, for one, is becoming a systemic risk issue increasingly”.

“So I think at some point we may see regulators make a decision that it’s time to decree this – but it should not be necessary.” She went on to say companies should make use of market standards like SASB and TCFD amid what she termed a possible “tsunami of money into sustainable products”.

She was asked by the moderator, Deloitte chairman David Cruickshank, about the timeframe.

She said: “Half the world’s drowning and half the world’s burning and yet we argue over things like disclosure, which is, frankly, not that difficult to do!”.