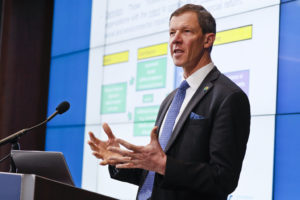 One take-away from the Global Impact Investing Network (GIIN) conference in Amsterdam this month was the market demand for comparable and consistent impact reporting, says Neil Gregory, chief thought leadership officer at the IFC.

The International Finance Corporation, a member of the World Bank Group, wants to address this issue through the Operating Principles for Impact Management by promoting the consistent use of measurement indicators throughout the investment cycle. IFC led the development of the Principles in collaboration with financial institutions including Partners Group, UK development finance institution CDC and Nuveen.

“It fills a credibility and integrity gap in the impact investment market.”

The Principles launched in April, with 58 signatories committing to annual public disclosure of how they implement them, with independent verification.

Since then a further 18 organisations, including Christian Super, the Japan International Cooperation Agency and Neuberger Berman, have signed up.

“We still have a lot more in the pipeline,” Gregory tells RI at the conference. “People feel it fills a credibility and integrity gap in the impact investment market. It also brings transparency.”

The nine principles include: establishing an investor’s contribution to the achievement of impact; conducting exits considering the effect on sustained impact; and assessing the expected impact of each investment, based on a systematic approach.

On the latter, Gregory says this could lead to convergence among signatories. “The principles say you should measure but it doesn’t tell you what metrics to use. The GIIN has recently published IRIS+ [its new management system] and a lot of our signatories are using that.

“A lot of development finance institutions use HIPSO [harmonized indicators for private sector operations] that is very similar to IRIS+.

“We are starting discussions on whether we can merge the two together to create a common core of indicators signatories will use. I think you’ve been hearing at this conference this is something the market is demanding.”

Another talking point at the event was the issue of understanding where investments make a positive or negative impact and reporting on this – an issue reflected in Principle for Impact Management 5 (managing potential risks of negative effects investments). Impact organisations such as Earth Capital take this approach reporting on the “Earth Dividend”, a scorecard based on net ESG impacts and benefits. Looking to next year, Gregory says that by April around 60 signatories to the Impact Principles will have published their first disclosure report. All reports will be available online at www.impactprinciples.org.

“For the first time we will be able to read how KKR manage their impact, or what AXA is doing or the IFC. This is going to be a real step change in the amount of transparency in the market and judging credibility of impact investors.”

Gregory says the IFC will prepare a report based on the first set of disclosure statements looking at areas of convergence, different approaches and where it sees gaps. “This will help drive progress and the next generation of impact investing.”

Principle for Impact Management 9 on independent verification was the biggest area of discussion for those involved in its development.

In an interview with RI earlier this year, Adam Heltzer, head of responsible investment at private markets investment manager Partners Group, said: “There is a cautionary tale from the lessons learnt of the PRI in that you have a set of principles that many managers have signed up to and then now you finally have an accountability mechanism (the PRI is set to delist laggard signatories in the coming months).

“In the meantime there is a sense of delusion. People are saying ‘let’s not spend ten years where people can sign on to these principles and you have a 1300-signatory base but it doesn’t mean very much’. Let’s add some teeth and transparency early on, which I support.”

The PRI does not require third-party assurance of its reporting and assessment process.

But despite the rigour of independent verification, overall the Operating Principles for Impact Management are deliberately not prescriptive to reflect the range of signatories, explains Gregory.

Peer learning, especially for smaller signatories, is under way covering approaches to implementation.

Going forward, Gregory says there will be engagement with asset owners. “Most of the signatories today are asset managers and DFIs, although we have a few asset owners like Zurich Insurance, AXA and Christian Super. We’re now spending quite a lot of time meeting with asset owners around the world and talking with them about impact.

“What we would like to see is that asset owners, when they start to make an allocation to impact, use the principles as a screening tool to choose managers. That’s the next frontier.”